We're not only big readers - we all enjoy narratives through television and movie as well! Here are some of the things we've been watching recently.

Rebecca T: I just finished a grand rewatch of all 4 of the Hunger Games movies. I reread the book and then rewatched the movie and I was really blown away by how faithful the movies are to the books - there are whole sections of dialogue lifted straight from the books! Obviously, there are a lot of things missing. That's just what happens with movie adaptations. But these are some of my favorite and, in my opinion, some of the best done book to screen adaptations. Now I'm ready to read The Ballad of Songbirds and Snakes!

rachelyons: I discovered Chopped was on Hulu so I’ve been watching approximately 20 hours of it per day.

Jenn N: I have been watching a DVD box set of Cagney & Lacey gifted to me by my boyfriend. When I was a kid my mom was on a bowling league on Monday nights. For some reason I always wanted to stay up and watch Cagney & Lacey which came on at 10pm. My dad only allowed me to watch the opening credits before going to bed. The show holds a special fondness in my heart of a simpler time. I caught a rerun on an obscure cable channel a few weeks ago. It was awesome. Extremely well written, engaging and still relevant and relatable despite the passage of time. My boyfriend then surprised me by sending me the box set of the complete series to subdue the quarantine blues. 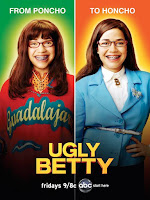 Alan:
In the last week, I've completely caught up on
Better Call Saul
The Good Place
Forged in Fire
Brockmire
I'm halfway through book 5 of 5 in Chris Fox's Void Wraith series. That's about 40 hours on Audible.

Now I'm sifting through Naked and Afraid, looking for unwatched episodes, while my wife and I are waiting for the new season of Dead to Me.

Albert:
Upload on Amazon, Also, I am catching up on Ru Paul's Drag Race.

NaomiRuth:
I just finished watching Bryan Fuller's Wonderfalls. I am planning on re-watching the first season of American Gods next.
Posted by Rebecca T. at 9:30 AM No comments:

We're back with another group post! A lot of us are returning to books that we enjoy or that give us a comforting feeling right now. Here are a few of ours:

Jenn N: " I always return to childhood favorites such as The Baby-Sitters Club where I can practically recite the whole book from memory and there’s always a happy ending."

Rachelyons: Anne of Green Gables "just makes me feel so cozy inside! It’s been a favorite since childhood so it’s just a great comfort read."

Rebecca T: "Mine is The Guernsey Literary and Potato Peel Pie Society by Mary Ann Shaffer and Annie Barrows. It makes me laugh and cry both sad and happy years and has so many sweet love stories, both romantic and platonic."


What are your go-to comfort reads? Share with us in the comments!
Posted by Rebecca T. at 9:00 AM No comments: