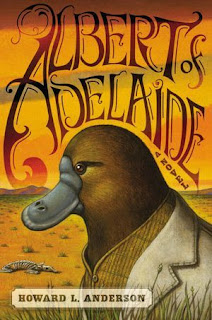 Summary:
Albert is a platypus who has escaped from the Adelaide zoo and set out on a quest to try to find others of his kind. He has a vague memory of a beautiful place where he once lived with his mother. Armed only with that knowledge and a stolen soft drink bottle filled with water, he sets out into the Australian outback to find home. Along the way he runs into a wild cast of characters including a wombat who likes to burn down buildings, a pair of bandicoots who can't seem to survive without a drink, kangaroos, dingoes, and the mysterious Muldoon. As he stumbles from one mishap into the next, Albert learns more about himself and the world around him and has to figure out who he can trust to help him on his journey.