I completely almost forgot about this post, and so I ran online and was going to write about the first things I could think of.

The first thing I thought of was David Hume. But I'm not going to write about that. That would be boring and I would end up hitting things. Instead I'm going to talk about one of those awesome things that usually get forgotten about. I call them Aesomeosities.

Not a lot of people - that I have met, anyhow - have read Icelandic sagas. The titles are usually long and hard to pronounce, and are they history or fiction? No one's really sure. So people read Greek myths because they're everywhere, or look at Egyptian art because they're easily accessible. Now, I'm not saying anything is wrong with the Greeks or Egyptians, well... I'm sure something was wrong about them. Most civilizations had at least one thing wrong with them. But that is not the point. There are times when truly awesome things get lost among the blur of shinier more accessible just as awesome things. One of those things - I believe - are Icelandic sagas. 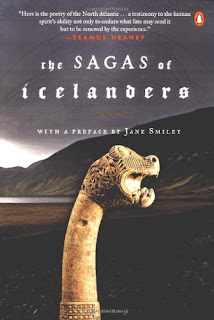 While working at Borders I came across this hunkin' baby: The Sagas of the Icelanders. It's put out by Penguin and it's massive. It's like, at least four inches thick. Sadly it's not a very heavy book, so you can't use it as a weapon, but regardless it is still fantastic. You are definitely getting your money's worth. There are introductions to each saga to try and help contextualize the following saga because I will warn you now: EVERYONE HAS THE SAME STINKING NAME. Okay. Actually, there's like five to ten names, but still. It can get quite confusing. But the Icelandic people have this wonderful subtle humor that is my favorite kind. There are some parts that can be a little bit confusing, or moves a little bit slowly, so I'm not saying these sagas are for everyone. But they definitely deserve a wider audience then they have theretofore received.

Theretofore. Heehee... That word is totally a cheat. It's squashing three words together and calling it a new word. English is hilarious.

Anyway! But there are other parts that move forward so quickly. There are adventures. And people are killing each other all over the place, so there's fighting and there's blood and there's revenge. And I'm not exactly a feminist, but I do have to say, it was quite fun to have strong women characters who could kick butt. There were quite a few women the men were afraid of. Sure, they pretend not to be, but everyone knew you did not cross an Icelandic woman, or there would be a reckoning. 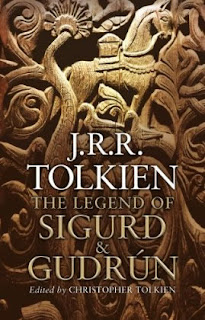 Shortly after finishing this lovely collection of sagas I read this book: The Legend of Sigurd and Gudrun. It's by JRR Tolkien, my favoritest man ever. It's extremely sad that he's dead or I would find him and capture him and make him tell me stories. Ahem. Anyway. This book you will usually find in the sci-fi/fantasy section. Let me be very clear about this: THAT IS WRONG. It is a travesty. This is not really fiction. This is, mostly, a translation. As in, it belongs in the history section. Or the linguistics section. Of the mythology and folklore section. But because Tolkien was known for The Lord of the Rings this book gets shoved in next to the Silmarillion and The Hobbit, which, don't get me wrong, I love both of those books, but JRR Tolkien was not purely a fiction writer. He was a scholar. He taught at Oxford (or something like that). He studied philology. He studied linguistics. He... Ahem. Anyway. This translation and re-imagining of one of the saga stories is a whole lot of fun. And the kind of poetry form he is using is really hard to do. Most people don't. But that's how much Tolkien cared about the Icelandic heritage.

Because the Icelandic heritage is important. Yes, so is Greek heritage, and Egyptian heritage, and don't get me started on Sumer. However, oftentimes I feel like the Icelandic tradition gets thrown out of the loop because it's not pure myth, it's not pure history. It's the awkward child. But just like awkward children can be some of the most entertaining, most insightful of individuals, so can the Icelandic Sagas. Trust me. They are so worth reading. And if the giant penguin collection scares you, don't worry. They generally come in very small selections so that you can ease yourself into it, or just get a taste of what this culture and literary tradition has to offer. It's totally worth it, because Icelandic Sagas are wonderful Awesomosities.
Posted by Unknown at 7:54 PM