Spring Into the Future Recap AND Giveaway!

On Sunday, Rebecca, Jenn, and Rachel met up and took the train into New York to go to the Spring Into the Future book signing at Books of Wonder. We were so excited to get to meet these fabulous authors!

First off, Books of Wonder is the cutest little book store ever. And all those kids books had the three of us practically drooling. We each said "ooh! I should get this!" about 4,000 times. Unfortunately we could not buy that many books, but we managed to spend a bit more than we probably should have anyway.
We got there pretty early and managed to get good tickets. Jenn was 007, which made us all dorkily happy. After grabbing lunch at a yummy burger place we returned and found a spot of floor where we had a good view of the table. It also happened to be at a spot where we could see into the back room where the authors were waiting and it was really tempting to just act nonchalant and wander back there and then fangirl. But we didn't want to get thrown out, so.....
Each of the authors read a snippet from their book, which was really fun and then they did a Q&A. These women are hilarious.

We found out that Tahereh would like to be her antagonist, Warner, for a day, even though it would be awkward... since he's a boy, that Anna Carey loves reading survival manuals so she will be able to take care of herself during the apocalypse,
that Veronica Rossi once lost her sketchbook on a plane (I think it was) and it got returned to her, but she was miserable for the month it was missing, and that Lauren Oliver is all for using boys as slave labor.
We also learned that, while we may act like crazy adolescent girls, we are not and sitting cross-legged on the floor for so long is not a pleasant experience anymore. Yes, we were the ones staggering to our feet and trying to work circulation back into our legs when the Q&A was over :)
It was really nice to talk to each of the authors during the signing and how giddy were we over Tahereh's swag?!
AND, because we're super nice, we even snagged a signed copy for one of our lucky followers! Jenn also picked up an extra one of the Spring Into the Future tour posters, plus we're throwing in a Hunger Games bookmark. We would have loved to give away a book from each author, but it just wasn't feasible this time, so we had to choose one. And since Rebecca found out about the tour because of Tahereh, we decided to give away a copy of Shatter Me! 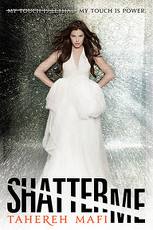 Here's what we thought of the book (we'll stay clear of spoilers for you!):


Jenn N: Tahereh does a wonderful job of putting you inside the mind of Juliette. You feel her the fear and confusion of her wrongful imprisonment right along with her. When Juliette learns to fight back, you'll be just as dazed and amazed as she was. Tahereh also does a great job of layering her characters - can Adam really be trusted? Is Warner truly evil? Read this book and decide for yourself.

Rebecca T: Juliette is an outcast a menace to society a lonely, broken, seventeen year old girl. She can't touch anyone because of her curse gift and now the Reestablishment wants to exploit utilize her talent. So Juliette has to fight for her life, for freedom, for love, and for the very soul of humanity that is being destroyed. With characters that live vibrantly on the page and in your mind, a premise that's intense and a little too real, and a style that will suck you into the story and not let go, this is a book you don't want to miss.

Claire: Such a good book. I thought that the crossing out would bother me at first, but the more I read, it was either the less I noticed or maybe the more it helped. Either way it was so different from anything I have read. So good!

Rachel: This book was a breath of dystopian fresh air. I was prepared for another fluffy YA book but found a love story that made my bones ache and an adventure that made my heart race. Tahereh was so inspirational and approachable and I feel privileged to have met her.

Stay tuned - You could very well see some reviews of the other books from the tour once we've had a chance to read and think about them! For now you can check out Stacey's review of Lauren Oliver's Delirium, the first book in the series!


To enter you just have to leave a comment on this post, letting us know what extra power you would want to have, and fill out the Rafflecopter so we can contact you if you win! (In some views there is a "view more" link below - you'll have to click on this to view the Rafflecopter and to enter the contest) This is our first time using Rafflecopter so if there are any problems please let us know! There are also chances for extra entries :) We love all our readers, but we have to limit this drawing to the US and Canada for shipping reasons. The contest will run through the end of the month - April 30th - and we'll announce the winners during our May 1st Laydown Lowdown! May the odds be ever in your favor! (oh wait, wrong book!)

I'm so jealous :P Glad you had fun! :D Tahereh is awesome <3

First: Sooooo jealous I live in Houston and wasn't able to go!!
Second: I would say flight. I've always has a fascination with birds, planes, etc and how they can soar up so high, above everything.
-martha :D

Martha, the tour is coming to Houston next Wednesday. I don't know how close to you it is but here is the facebook link to the event https://www.facebook.com/events/252344731511365/

THANK YOU SOOOOOOOOOOOOOO MUCH FOR LETTING ME KNOW!
I am officially going!!!!!
ahhhh so excited!!!
:DDD

I would love Juliette's power I think it would be awesome but if I couldn't touch the people I love that would suck so I would need it to be tweaked a little..lol

wish i could have been there!

I've always wanted to have the super power of healing, it would just be the most amazing thing in the world; to be able to take away the pain from others and save lives *shudders*

I always wanted to have the power to shapeshift, the whole concept of being whoever you want to be just always attracted me in some way. :)

That would be an amazing superpower !

Hmmm... what power? Can't choose! Maybe read minds or something. Something creepy that other people can't see right away.

I'd shapeshift into a lazy fat housecat and sleep all day :)

I would love to be able to teleport. Usually when I tell people this they think I am so lame but I love the whole idea that I can go anywhere I want without wait. I want to travel the world and with this ability I would be able to do it whenever I want!

I would love to be able to fly, and get somewhere fast without traffic lol

I want to fly and be able to speak every kind of language!