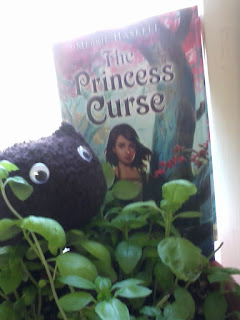 Hello Down Unders! This post will be super short because it's finals week BUT. I just had to share this book with you.

The Princess Curse is a really fun book. The main character, Reveka, is an herbalist working in a castle. There are 12 princesses with a mysterious curse that no one has been able to break. There is a huge reward for whoever might break it. It is Reveka's goal to win the reward so she can become a nun and not marry and just spend time with herbalist stuff.

The story is a mixture between the Twelve Dancing Princesses, Hades and Persephone, with a tinge of the fey world, and a dab of almost historical realism. Reveka is an engaging character you really root for. The world-building is stable and believable. You almost believe this is a real story that happened in a real place across the globe, somewhere near Romania.

I was concerned at first when it took a turn toward mythology, but Haskell wove it in well and created a believable atmosphere. And Reveka responded in a way that I found to be very realistic. There were touches of humor that I incredibly liked.

The only thing that bothered me and Wombly about this story was the cow-herder boy. I was sure there was going to be more to his character than there ended up being.

My friend read this book as well, and I know for her she was a little bit disappointed because there's so much more to the story that she wants to know.

Hopefully Merrie will write more of this world in the future.

For now! Happy finals (if you have such things) and have a good weekend!

If you're interested in buying The Princess Curse here are some links:

Wombly is blushing and mumbling his sincere thanks incoherently.

Thank you for commenting! :D