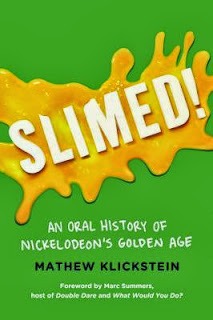 "SLIMED! An Oral History of Nickelodeon's Golden Age tells the surprisingly complex, wonderfully nostalgic, and impressively compelling story of how Nickelodeon -- the First Kids' Network -- began as a DIY startup in the late 70s, and forged ahead through the early eighties with a tiny band of young artists and filmmakers who would go on to change everything about cable television, television in general, animation, and children's entertainment, proving just what can be done if the indie spirit is kept alive in the corporate world of contemporary media... All from those who made it happen!" - goodreads.com

If you were a kid growing up in the mid-80's to mid-90's it was next to impossible to not be familiar with Nickelodeon shows unless you were living under a rock.  Mathew Klickstein interviewed dozens of Nickelodeon stars, producers, directors, writers to compile this oral history of what he calls and I believe to be Nickelodeon's "golden age."  As this in an oral history, the book reads like a transcript of a roundtable discussion with the assorted talent and crew.  While this style provides the reader with candid stories, it was also a little confusing at times.  There was several passages in the book where one "conversation" would end and another would begin without a segue.  I had to re-read several passages over again for clarity.  Throughout the book, the actors, producers and assorted personnel are identified by name only.  While I watched many Nickelodeon shows back in the day, I wasn't a fan of every show nor could I recall all the actors' names.  I think the "Cast of Characters" section that appeared at the close of the book, would've been better placed at the front of the book to refresh the readers memory of who was who.

Regardless of some confusing passages, "Slimed" was a very interesting read.  The backstage drama behind "Ren & Stimpy," was unbelievable.  Marc Summers provided some great anecdotes about the making of "Double Dare."  My favorite anecdotes though came from the cast of "Hey Dude."  Two of the show's actors had an off-screen romance and another had a stalker problem that caused her to retreat from the public eye.  Jim Jenkins, who created the cartoon "Doug" shared many great stories that left me yearning to order the entire series on DVD.  I also appreciated the food for thought contrast of the "golden age" Orlando studio days of Nickelodeon to the Hollywood polish of today's Nick programming. 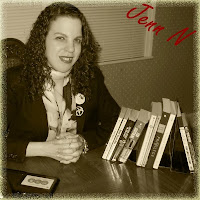 While "Slimed" is a great book, it's a niche read that I'd recommend only to Nick devotees of the 80s and 90s era.

Special thanks to Netgalley for providing me a digital copy in exchange for a fair and honest review.
Posted by Jenn N. at 9:00 AM

Yikes. No wonder the book was confusing to you: You successfully misspelled every name you mentioned ... including Marc Summers! His name is all over the book, including on the cover.

And take a little time to read a few other oral histories: You'll see it's rather typical to include only the name of contributors and it's ALWAYS the case that bios are kept in the back. Please Kill Me is a fine example or even the new Salinger oral history.

Amateurs!! Such a shame the Internet has been degraded to this. How long would it have taken to make sure you spelled folks' names right? Guess it's time to grab a few more English degrees there, eh? ;)

Unfortunately misspellings sometimes slip through the editing process. We regret the error.

This was an inciteful and educational review. The target audience for a book like this would be someone of our generation: children who grew up during the 1990's. I've heard it said that the 90's were the best time for children's shows on Nick. When I look at the shows today, I can't help but wonder if my parents thought what we were watching was a bunch of crap as well.

To call this reviewer "amateur" is a bit harsh. Perhaps the above commenter should pick up Emily Post's "Etiquette." We might then understand which way the internet is truly going.