Once Upon a Time - The Bear and the Bow

On tonight's episode we finally get some decent Belle time. And the bonus of some good Rumbelle scenes as well. In the flashbacks Merida kidnaps Belle to get her help in saving Merida's brothers - and her kingdom. In the present Merida, under Dark Swan's sway, goes after Belle in a last attempt to turn Rumple into a hero. Meanwhile, the hero squad asks for Arthur's help to reach Merlin and finally learn that he's a snake in the grass. After getting Merlin's answering machine they're, of course, no closer to knowing how to stop Dark Swan than they were before. 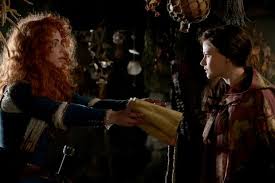 This was another good episode. Finally finally Belle has a chance to shine and be something more than a footnote. It's about time. The plot was moved forward nicely while doing some nice character development at the same time.

How much do I love Belle's research skills? And how much did I laugh at this exchange:
Merlin: Aren't you the clever one?
Belle: "Glad someone noticed."

I hear you, Belle. A lot of fans were rejoicing over that tonight with you. Though, there was a short period of time where I was afraid that the episode was going to be a farewell tribute, so I'm quite relieved that they managed to get Rumple to step up without sacrificing Belle. Dark Swan seems to be a little desperate. Her manipulations are nowhere near as smooth as either Rumple's or Regina's. Or Cora's for that matter. Her work with Merida seemed sloppy at best, her bid to turn Rumple into a hero a stretch, and her palaver with Zelena ridiculous.

As for Zelena, I was rolling my eyes again, though her reading What to Expect When You're Expecting had me giggling and I found it sad that I actually thought her smarmy villainy was better than Dark Swan's weird cold smirkitude.

I thought that Rumple's transition was well done - it could have felt much more contrived, particularly in such a short period of time, but with all of the Rumbelle history it felt more like inevitable. Though I was surprised that he didn't point out that he only bargained to pull the sword out for Emma - never actually promised to give it to her. Dark Rumple would never have overlooked that loophole and I was surprised Dark Swan did. Okay, actually I'm not. Deals aren't really her thing the way they were Rumple's. Of course, one brave act does not necessarily a hero make. It was enough, obviously, for Rumple to pull the sword from the stone, but what will happen if he's required to sacrifice to save someone who isn't Belle? Will his newfound courage be enough? His eloquent apology and admission of guilt to Belle points to a greater change (along with the fact that he finally admitted the true extent of his cowardice in breaking his own foot), but we shall see how it holds up.

But Rumple makes a good point. Yes, Emma has the sword, but Rumple is quite a threat. Not only is he now a hero, but he's an ex-Dark One. He knows how the dark magic works on someone, what they will be tempted with, how Emma will be likely to think and to act. And that edge could make all the difference.

Now that Excalibur is out in the open I'm curious to see what will happen if/when it's made whole again.

I'm so glad Arthur's double talk has finally been revealed, though it seems rather stupid of him to not make sure no trace of the mushroom remained. Glad to see Henry back in the midst of things. Hopefully this betrayal drives him to free Emma more than ever.

Have to love Regina: "I don't believe this. We're getting Merlin's voicemail?"

And we're left with many questions: What did Dark Swan do to Merlin? How did she go fully dark? Why wipe everyone's memories and bring them all back to Storybrooke (even the Camelotians...Camolites? Cameloters?)? Looking forward to getting the answers!
Posted by Rebecca T. at 9:28 PM