Once Upon a Time - Swan Song

SO. Um. Yeah. I'm feeling a little speechless after that episode.

Tonight the battle against the Darkness comes to a head, with Emma "I can't move my face" DarkSwan ready to sacrifice herself to protect her family. Meanwhile Snow and Charming and Henry act completely contrary to character and decide to sit around eating pie while waiting for their impending deaths as Regina makes all of my wildest dreams come true and finally throws Zelena out a window. In a rare wayback flashback we get a little more of Killian's backstory for no real apparent reason other than for Regina to make vague allusions to it all episode long. Rumple finally proves that I have, unfortunately, been right all along concerning the core of his character, and the set up for the second half of the season means we could see pretty much anybody who has ever been on the show and I'm not sure how I feel about that. 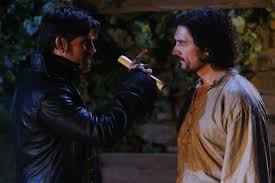 So, even though the flashbacks felt really unnecessary, I do have to say that the person in charge of casting is probably the most brilliant person working on this show. Killian's father was absolutely spot on.

I'm finding myself with actually little to say about this episode as a whole. There wasn't as much a unifying theme as there often is. So here are all of my random thoughts:

As so often has happened, I found myself typing the following early on in the episode: "Someone push Zelena out a window already would you?" When this actually happened I was literally cackling on my couch. Now, I'm sure this isn't the last we've seen of Zelena, because the writers like to torture us, but that moment was the best.

I hate that Killian was made a Dark One, but I love Killian as the Dark One acting wise. Kind of the way I love evil Regina and evil Rumple. The actors just play it up and I love seeing them pull out such a wide range. That was what I was really hoping for from Emma *sigh* Also, I loved that Killian's smoke was red.

Can I just say how tired the trope of the "good woman who saves the bad man" is? I think that's one reason that I actually am kind of really glad that Rumple twisted everything around to regain all of his power rather than just becoming the "hero." Because Belle doesn't fix him. His love for Belle doesn't miraculously change his character. I am both mad that she came back and fell for his lies again (though they were good ones) and very happy that she is not gone from the show. I'm just really scared we'll be stuck in that loop. I want her to be separate from Rumple so she can have crazy amazing adventures as herself, not as a plus one.

Rumple's ancient flip phone made me laugh so much. It was just a perfect touch.

Is it just me, or was it really super easy for the Dark Ones to trade all those souls. It would seem to me it would be a little more complicated to do something that major? 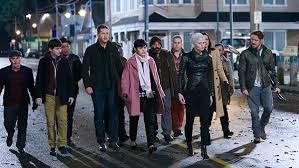 But here's my biggest pet peeve. I was so frustrated with Snow, David, and Henry. The three of them are like the most tenacious people on this show. They don't give up. Ever. I mean, come on. It was completely out of character for them to just shrug and go to the diner to "make the most of the time they had left" instead of trying to find a way to NOT DIE. How many other times have they faced the impossible and figured something out at the last minute. Maybe they could have stopped Emma from giving the sword to Hook if they were actually THERE. I'm sorry, but that's just lazy writing. It's like, hey, let's take the people who could most help Emma out of the equation so everything can go wrong BECAUSE PLOT.

Wait. No. I think my biggest peeve of the night was Emma being STUPID enough to hand the sword over the "Henry" when the door never opened and she KNOWS that Dark Ones can take on the shapes of others. That was just too dumb for words.

I am so happy that he turned around and made the right choice, and yes, I realize that it plays into the bad boy saved by the good girl trope, but he doesn't make the choice just because of Emma. He makes it because he wants to be a different kind of man (whereas Rumple doesn't want to be different. He likes his power). BUT the yoyo on his emotions/decisions since finding out he was a Dark One has been ridiculous. I'm going to kill you; I'm going to kill everyone you love; I'm going to make you suffer; wait, Nimue is hurting you. Never mind I'm going to sacrifice myself to save Emma because I remembered that I do love her after all. Oops.
It's just a little hard to swallow. Also, did they have to kill him? Again? I mean, Graham, Neal, Killian? Ridiculous.

And what do you think about the whole Underworld thing? At first I was thinking that maybe they were going to start dipping into mythologies (which I guess could still happen), but now it kind of looks like an excuse to revisit everyone who has died. I wonder who all we will see? And why did everyone go with Emma? I mean, it seems like it would have made more sense for someone to stay behind, like Snow and David, to, you know, take care of the babies? I get that the fairies have them, but wouldn't it be better for at least one of the four parents to not go into the underworld?

Crazy. What did you think? Who are you hoping we'll see in the second half of the season?
Posted by Rebecca T. at 10:06 PM