10 Things I Loved About The Agency Series by Y. S. Lee

Mary Quinn was only twelve years old when she was sentenced to death. Turning to thievery after the death of her parents, she managed to scrape out an existence on the streets of Victorian London, but after being rescued from the gallows and given a home in a school for girls, her life took a turn for the better. Now she's seventeen and learns that the school is more than it seems. She's given the chance to train as a spy in an agency of women who take advantage of the way girls and women are overlooked and taken for granted. As she faces a variety of mysteries, villains, challenges, and a chance at romance, Mary has to deal not only with the dangers of her work but also with the weight of her past and her heritage. Can she come to grips with who she is or will she lose everything she's worked to gain? 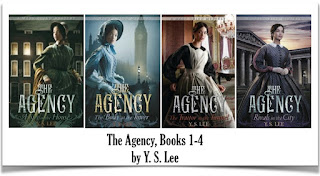 I received the second book of the series - The Body at the Tower - at BookExpo America several years ago. I couldn't read them out of order, of course, so I tracked down the first book. After reading the first two I had to read the third and fourth as well!
This review contains some mild spoilers for the series, since I'm looking at it as a whole, but I'll try to keep it as spoiler free as possible.
So here we go - 10 things I loved about Y. S. Lee's Agency series