Two Years, So Many Books

I've just spent the last two years of my life working on my MA in English. It has been an amazing experience and I can't believe that I graduate on Saturday (eep!).

So I thought that now would be a fun time to reflect on some of my favorite books and authors I've encountered during this time - all those things I probably never would have read on my own - and maybe introduce some of you to some fabulous literature!

First Semester (aka WHAT THE HEY HAVE I GOTTEN MYSELF INTO?!):

19th Century American - One of my favorite periods of literature, but we read a lot of stuff I never had and even some things I'd never heard of. The great discovery in that class was Sarah Orne Jewett. I did my paper on The Country of the Pointed Firs and I really want to read more of what she has written.

For Introduction to Literary Research I did a case study on Willa Cather's O Pioneers! Cather led a fascinating life and her other books are definitely on my TBR pile.

Second Semester (aka And I thought LAST semester was bad?!):

Fiction Workshop - though most of this class was reading each other's submissions, we also read a few novellas and sets of short stories. My personal favorite was Cynthia Ozick's The Shawl. A short story and novella together in a book that was absolutely heartwrenching.

Studies in 20th Century British Literature was a fun class and I read a bunch of things I'd wanted to read but hadn't gotten to yet like 1984. But my two favorite books from that class are both lesser known works by popular authors. The first was George Orwell's Coming Up for Air. I wrote a paper on this book and it is one of those novels that you get more out of the more times you read it. In my opinion it was far superior to 1984. The second was Virginia Woolf's Between the Acts. I read Mrs. Dalloway in undergrad and was seriously underwhelmed. So I never read anything else by Woolf. I appreciated it more when rereading it for this class, but Between the Acts was even better. I really think it's a shame these two are not as well known. So you should go read them.

Third Semester (aka I AM DROWNING IN LIBRARY BOOKS):

This was the semester I started my thesis and I was also working on 2 major papers for other classes so I had over 85 books checked out of the library at one point. The librarians literally knew me by face and shook their heads in mock horror every time they saw me. I wrote my thesis on L.M. Montgomery's Emily of New Moon trilogy (which you should all go read right this second). But in the process of researching things about material culture and house/space theory I discovered Gaston Bachelard's The Poetics of Space. I don't really read non-fiction, but this book sucked me in. I found something incredibly profound on every page. It is phenomenal! 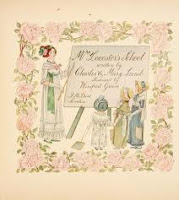 British Romanticism - Not really my favorite class, but I ended up doing my paper on Charles and Mary Lamb - focusing specifically on their literature for children (my main interest) and had a lot of fun reading Charles' letters and their Mrs. Leicester's School.

Post-Colonial Literature - We read some fantastic things, but I really loved Wide Sargasso Sea by Jean Rhys. Jane Eyre is one of my favorite books of all time and this tells the other side of the story - the tale of the madwoman in the attic.

Fourth Semester (aka HOW DO I STILL HAVE SO MUCH TO DO?!):

In Early American Literature we focused on the grotesque, which was a little odd at times, but an interesting way to approach a really wide variety of texts. It was probably my favorite overall class. I loved reading Benjamin Franklin's "Silence Dogood Letters." He has the quirkiest sense of humor. And I read Hawthorne's The House of the Seven Gables for the first time. It's a little dry, but as I started to get into the story I found it rather interesting.

Modern American Writers: I loved Eudora Welty's The Robber Bridegroom. The professor made tons of parallels to fairy tales and myths and it really enriched the story. But the book by itself is a lot of fun!

And now I'm super excited that I will get to read the things that I want to read again! As much as I've loved these two years, I really miss time to read for pleasure. So excuse me as I attack my TBR pile :)
Posted by Rebecca T. at 7:30 AM

Yay for books! Yay for graduating! Eek this keyboard is weird. But I'm so excited for you. Huzzah! U should go read some of things sometimes...