This is a bit later than normal because we got caught up in the Firefly marathon and then of course we had to watch Serenity to see the ending and then I had to mourn appropriately and then I remembered it was Sunday and it was midnight and I banged my head on the wall.

But it was totally worth it. Joss Whedon is a genius and I wish there were so many more episodes of Firefly.

But enough about that (though if you have not seen the wonder that is Firefly go watch it this week because yes.) you want to hear all about Once Upon a Time. At least I'm assuming you do if you keep coming back to read my snarkiness :)

Tonight is the first episode that takes place almost entirely outside of Storeybrooke, which made for a nice change of scenery. In a totally unexpected twist (and by unexpected I mean I totally called it for sure last week and people have been saying it for a very long time) Neil turns out to be Rumple's son and Henry's father. People stand around and talk. A lot. And Emma gets to return to her roots as a bounty hunter and even do a flying tackle.

In flashback Fairy world we go way back in Rumple's life when his wife was loving and supportive instead of viperish and a cheaterface. However, we also see that her disdain is pretty well founded and we have to wonder why the hay bale she would leave her son with this man.

In a few glimpses of life back in Storeybrooke David Charming and Snow try to sort out the most twisted family tree in all of ever and Greg catches Regina on film magically rifling through Belle's purse. And Regina, for no reason that anyone could possibly really understand, continues to trust Cora and listen to her every whim.

I have a proposal. I think they should change the name of the show, just so everyone knows what is really going on here. So let's call it:


I Will Do Anything for My Child

I don't have a problem with this overarching theme, but I kind of feel like they're starting to beat us over the head with it. I'm pretty sure that phrase (or something incredibly close to it) was stated at least 3 times this episode alone.

When they showed up at the apartment and Neil (and by the way I am calling him that for 2 reasons: 1. That is how Emma knew him and how we first came to love him 2. I am way too lazy to look up how to spell his other name right now.) takes off I literally hit myself in the head and said DER.

Obviously this is why Rumple brought Emma. She is a bounty hunter. He is a cripple. She would be the perfect choice to help him run down (literally) his son who doesn't want anything to do with him.


This week's episode was definitely centered around the idea of cowardice and bravery in both storylines and none of our characters (except Henry) came out very well.

Emma made some epically bad decision in this episode again. Not telling Henry the truth was problematic (obviously), but then lying to Gold and Henry and letting Neil just walk away? No. Very bad idea. She should have listened to her mother and realized that nothing good would come of it and that she was really just trying to protect herself. And of course it blew up in her face.

When Neil asked if anything good came out of their relationship I wanted to slap her for saying nothing. NOTHING. N.O.T.H.I.N.G.?! For real? What about HENRY for pete's sake. Or meeting your parents. Or GAH! Okay. Maybe that was overreacting on my part, but it was just so cold and false and not cool at all.

I was excited that we would finally get to see what was in August's box, but it ended up being a rather lame reveal.

Side note - did you notice the sign on Neil's wall for Cleaners and Hatters! Please let this be an omen of Jefferson's return!

A quick jump over to flashback fairy world before I come back to the end of the Manhattan storyline.

Rumple really should have stayed away from that cage and, of course, he created a self-fulfilling prophecy as usually happens when people try to change their future. I liked this Rumple at the beginning. He's so hopeful and earnest and he dissolves so completely and so quickly. He really did take the coward's way out, but his wife turns on him so fast that I just can't reconcile the woman at the beginning with this one. It's no wonder it took him forever to believe that Belle's love could be at all real!

Also, I hate having Belle without a memory. I miss her! 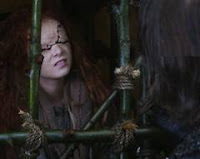 The makeup and CGI for the seer was incredibly creepy and well-done. However, I would just like to point out that Rumple's ring (the one he is obsessively fiddling with while he waits with Henry) is the same creepy blue as the seer's eyes and I'm pretty sure that's where his future seeing magic is. Though at first I was really afraid he actually had her eye in the ring. Which would have been even creepier.

We also know now how Rumple got his limp and I totally never really realized how spry he is when he's all dark-magicked up. Plus he breaks out in that horrible glitter skin condition. And his voice goes all squeaky.

And now we know why Rumple helped Regina with the curse. He wanted to be reunited with his son. Of course.

Storeybrook almost non-existent in this episode. Just a couple of comments.
1. Snow and David Charming are adorable together as always and the chemistry between them is perfect now that the whole curse thing has been straightened out.

2. Who is Greg talking on the phone with all the time? It has to be someone we know or know of or we wouldn't see him doing it. Maybe August?

3. Hook just cannot catch a break. You'd think he'd have learned his lesson about making deals with women by now.

4. I really really really don't understand why Regina puts up with Cora for even a moment. I know she wants Henry back, but after everything that has happened she has to know that this is the one thing that would drive him completely away from her.

Okay, back to Manhattan and the final moments.

I was cheering Henry on. The only one there willing to face the truth no matter what. And the only one willing to really forgive and give a second chance.

I would like to point out that when Emma took Henry's face in her hands and smoothed his hair it looked eerily Regina like. A nice touch when she's having to face up to the fact that she's lied to him just like Regina did.

Rumple says that he's changed, which he has. However, now that he's lost Belle I'm pretty sure the reformation is not going to last long at all.

I loved that Neil kept the dreamcatcher all this time. So sweet. At the beginning of the episode I was kind of cringing at Neil. I loved him in "Tallahassee" (should we expect to see him show up in all city-titled episodes?) and was kind of disappointed with him at first here, but he really redeemed himself by coming back for Emma and truly wanting to know Henry.

And for the final twist? Henry will be Rumple's undoing. Great.

My thought on this: PLEASE do not tell me this will be their way of getting rid of Henry so they can avoid the problem of an actor that will be growing much faster than the character is supposed to. Because... No. Just... No.

Next week it looks like it all hits the fan. so that's exciting :D
Posted by Rebecca T. at 2:15 AM

If they kill off Henry I will be so upset! I know a lot of people are annoyed by him but I love him!

I generally love Henry. However, here is my only problem with him last night (which quite literally kept me up all night) - he accused Emma of being just like Regina. Now while it was not right for Emma to keep the truth about his father from him, Henry consistently defied the adults in his life during Season 1 and thought nothing of it (taking Mary Margaret's credit card to use the service to find Emma, never doing what his adoptive mother or birth mother said once Emma came to town). I guess it's okay for him because he's a kid and he's still learning?

I was very worried for Emma when she tried to keep Neal's secret about being Bae from Gold. But I thought it was sweet that Neal/Bae returned to his apartment just in time to almost "save" Emma from Gold's wrath and that he let Gold talk to him so that Emma would not be going back on her deal.

I wonder if they all got sore throats in this episode with all the yelling. I mean, like everyone who was in the NYC scenes was yelling...Emma, Gold, Henry, Neal. I do have to say though, I liked the scenes with the 4 of them together.

And I kind of feel like Hook is a total third wheel, and I feel bad for him. I mean, first of all he's in a house with 2 women. Second, he's the only one without magic in the house. I guess it's a good thing that he is good at map reading otherwise Cora and Regina would have no use for him.


Can't wait for the next episode.


(And I caught some of the Firefly marathon yesterday too!)

@Jessica: Yes! I love him too!

@Jenn H: Yeah, that definitely went a little over the top. However, lying that his father was a fireman who died in the line of duty was a pretty big fabrication. And he doesn't shut her out for long.

But your right, Henry does do a lot of things that are not right. I think he does get away with it because he's a kid, as you point out, but I also think that in S1 a lot of us forgave him because he was the only one with all the pieces (other than Regina) and we wanted him to help break the curse. I'm not saying what he did was always right, but it had to be frustrating to have no one listen to or believe you.

YES! On the yelling. They just yelled and yelled. They must have been hoarse after that scene.

My thing with Hook is starting to be how gullible he is. He's way too trustworthy for a pirate!

Can't wait for next week :)