So tonight Henry and Emma are off on a quest with Rumple who is having major magic withdrawal symptoms. Seriously jumpy. But Henry's got his cinnabuns, so it's okay that he's off on an airplane with the guy who has repeatedly tried to trick, kill, and destroy the rest of his family. *cough*

Back in Storeybrooke Belle and Ruby start to bond, Belle freaks out, and the dude from the car is creepy as all get out. Meanwhile Snow and David Charming chase Hook, free a giant, almost get squished by a giant, save the same giant, and finish off the night with a coffee and a good laugh. Regina is popping in and out of people's lives being her good old manipulative lying self and is much more the better for it (um, yes, I'm a terrible person who doesn't want to see her redeemed because blech). 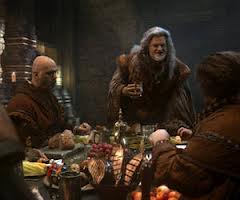 Then over in flashback fairy world we get to see David Charming's twin brother, James, in action and he proves to be as horrible a person as his adoptive father, Charles Widmore King George. But we have a lot of fun seeing the actor be all swaggery and stuff. And we meet Jack the giant slayer who is actually Jacqueline and is pretty much as big a jerk as James. Hurley Antoine is the smaller, less useful brother who is teased by all the other giants. When he runs off to the human world he thinks he's made friends, until they betray him and kill his entire family. No wonder he was grumpy when Hook and Emma showed up.

In other news, this showed up on my Facebook feed repeatedly this week from the Once Upon a Time fan page and it was too wonderful not to share here: 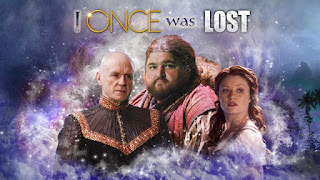 Can I just say that the invisible ship is pretty freakin' cool.

And, as I have said repeatedly, I love Regina this way. I feel like a horrible person, but seriously. Let's keep her in the evil witch category. Though I do have to say that falling right into Cora's plan after all of the "my mother is evil incarnate and will devour our souls" stuff seems really off. She has the appearing thing down though. When she pops up behind Hook it almost startled me.

Jorge just can't be anyone but Hurley. He's so cute and misunderstood. Also, the CGI was much better in this episode.

You know, when he was walking down the street in Storeybrooke and getting honked at - wasn't anyone there concerned about who this rather large guy is and why he's in their rather ... um ... contained town? Honking as they drive past didn't seem the appropriate response.

I loved the reference to Wonderland again, though I was a little bit terrified that the girl was going to be some twisted Alice. Then when she said her name was Jack I kind of felt like I should have seen that one coming.

And speaking of Jack - she wins for lamest line of the episode: "Take us to the beans." ---Really?

James is a fun guy to have hanging around. Talk about a jerkity jerkface. Yes, I am 12 years old. I was completely torn between hating his guts and loving the chance for Josh Dallas to play another role. I love that they brought that element back in.

Also, Snow's explanation about Emma being gone sounded so ridiculously lame, which was funny because it was actually true. And the conversation about David's name as they were running for their lives was hilarious.

I am also excited by the idea that Antoine could be a reprising character now. And magic beans? Not only does this ramp up the stakes for Cora, but it also means that we might get to see some other realms soon. Though I really hope this doesn't mean that Jefferson is out of the picture, because I need him back on this show soon please.

This is the happiest and most carefree we've seen Snow almost ever. She was just floating at the end of the episode. Snow and David Charming are about the cutest thing ever. 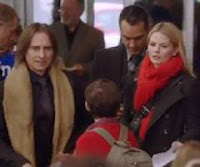 Need a travel tip? Don't ever take Rumple with you. He is pretty much the most anxious traveler ever. His magic shawl is not working so well and I really think he might be losing his mind (also, on a side note, I am more and more convinced that Henry's father is Rumple's son. But we'll see how that goes next week. Talk about craziness. That would mean that Rumple is Henry's grandfather?! Okay. Too weird.)

And finally Belle. Ruby coming in with the picnic basket gave me a little giggle, but when she gave Claire Belle Jules Verne's The Mysterious Island? I just about laughed myself off the couch. I am very easily amused.

I am really concerned with the amount of tranquilizers they are pumping into her. That has to be affecting her recovery. It really does. And Greg could not be creepier if he tried. Okay, he probably could, but he really really freaks me out. There is something really weird going on with him.

So next week's episode looks so good. And I'm so happy to be back with my fairy tale characters :D
Posted by Rebecca T. at 10:00 PM