Tonight Hook heads toward revenge and gets locked up. And left behind. Again. Rumple and Neal bond over a Hook wound and Emma finds out Neal is um, yeah. Engaged.

Back in Storybrooke Snow meets Mrs. Patmore, overhears Cora and Regina, and makes a predictable decision and then a not so predictable vow.

While in the flashback fairy world Cora is up to her shenanigans and turns out to be the grand puppetmaster. Snow has gotten older while pretending to be younger and her mother dies before we actually get to meet her.

Was I the only one that was super super distracted by young snow? I'll try to suspend my belief that she is actually younger than we've met her before even though she is most definitely older. Older older. But okay. What can you do when you have to show something earlier with a pre-adolescent/adolescent actress who is at least a year older?

No, what really drove me crazy was her facial expressions and the way she puckered her lips constantly! Gah! I wanted to just shake her.

Ahem. Okay, now that I've gotten that out of my system I can move on.

Today's theme was definitely honesty. Also, is it just me or are these episodic themes getting a lot less subtle? Or was I just not paying attention to it in the first season?

But truth, lies, and who is being honest or deceitful is a major part of the development of the episode.
I loved the shot at the diner with Regina viewed through the warbled glass and Snow shown clearly. Though it was a little obvious right as Snow yelled, "No more lies."

I thought Rumple's advice to Emma was a nice scene, but his interaction with Henry was kind of all over the place. I guess it's understandable, but I really didn't get why he flipped out and blamed Henry for why they were in New York.

Henry is a little bit harsh with Emma still, but when I think about the topsy turvy-ness of his life and how many things about himself he's discovered over the past year or so it's a tiny bit justified I guess.

I loved that moment when Bael Neal says "Papa" - I just like the way it shows that connection and it felt very genuine in that moment. But is it just me or is it taking an extraordinarily long time for them to actually do anything and that car couldn't have been any closer?

How much was Emma impressed that Neal can sail a pirate ship? So funny. And I had to laugh when Neal explained or alluded to why he isn't hundreds of years old. Though I think I just assumed there wasn't that much time that had passed.

MRS. PATMORE! That is all. I knew she was going to have to die, but I was so happy to have her for the episode. 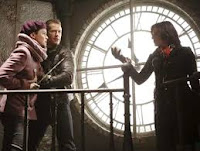 I have to admit I was really expecting Snow to keep the dagger, but the choice was predictable none-the-less. And it makes more sense for the dagger to be in the hands of Cora. Who, by the way, was looking old and haggard in this episode. If they went looking to dig up the dagger is there a reason Regina didn't wear more suitable clothing? Or a reason they didn't just use magic to move the dirt? Regina looked beyond ridiculous.

BTW if something happens to David Charming the writers will feel my wrath. *shakes fist of wrath*

Did we know that Cora was the miller's daughter before? I feel like I kind of knew that in the back of my head, but at the same time it felt like brand new information. This is, obviously, how she met Rumple then, right?

I did like the weaving of the different flashbacks together in Cora's memory from all of the other pieces we've seen over the last season and a half.

You would think all of Cora's manipulation would give Regina some pause. A little more pause than she's showing.

I don't want evil Snow. Has she learned nothing from all the stories? But, well, you know, killing Cora isn't really evil, evil. right? I mean, I think that falls under prevention of atrocities rather than murder.

Next week looks interesting and I'm super nervous over who is going to die. I am thinking it might be Cora? But she's about the only one I would be okay with dying right now. For serious, though. If they kill David I will hunt them down.

So what did you think? Who do you think will die? Or was it just a scare tactic to make us watch?
Posted by Rebecca T. at 12:55 AM

I spend much of the episode wondering if the characters in Storybrooke are actually the characters we see them as or if it's Cora pretending to be someone else. Ever since she pretended to be Regina to "kill" Archie and then Henry to have Regina allow her access to her hidden place in the mausoleum I just don't trust anyone is who they say they are.

So I do think someone will die though I'm not sure who.

I was hoping Snow would keep the dagger, though I'm surprised Regina or Cora didn't use magic to take it out of her hand. It seemed Johanna would be okay with Snow making that decision.

I felt a bit better about Henry's interaction with Emma. I thought his comment about the New York pizza was a bit harsh in regards to Emma but I did like that he still respected her enough to ask if it was okay to go to the museum and take his camera and how he listened to her when they got Gold into Bae/Neal's apartment after he had been attacked by Hook. So even if he doesn't trust her as much he does respect her, I guess.

Finally I may have missed something but how was Hook able to leave the lines of Storybrooke without losing his memory that he's Hook? I know he was on his ship and is it because it's cloaked that he was able to evade that? Or something else?

I'm still trying to take in much of the episode - will probably have to go back to watch it another time or two.

Someone else commented on the Hook leaving Storybrooke - he wasn't under the curse, so it doesn't apply to him. The same way Emma, Henry, Regina, and Baelfire can all leave without repurcussions.