Tonight we get a little insight into August's descent before his arrival in Storybrooke and a lot of little pieces start to come together.
Neal's fiance arrives in Storybrooke and looks suspicious, freaking out and then proving to be far too resourceful.
August returns made of wood as punishment for his lying, cheating ways.
Snow tries to figure out what it means to have a black spot on her heart and whether she can every make things right again.
And Regina tries to figure out who exactly Greg is.

Even though everything came together eventually I feel like I spent a lot of the episode thinking "wait, what?" - not in a bad way, I just was having a hard time adjusting to some of the flashback things that happened.

I hate Tamara, but I like the introduction of a new "bad guy" who is a serious threat to Storybrooke and everyone there. With the demise of Cora (who was too wishy-washy in the end) and Regina's constant vacillations, it's kind of refreshing to have a straight up villain again. And, bonus, it doesn't look like she has any kids, so power really seems to be her only motivation.

I had a friend on Facebook suggest last week that the "her" from GrOwen had to be Nealfire's fiance and as soon as she said that I was firmly convinced it was so. I had no real proof, but it was the only thing that made sense to me. So I was pleased to see we were right! I am very curious to see what her backstory is. Why is Tamara so obsessed with finding magic?

And she is creepily good at playing dumb and angry for Nealfire and is rather terrifying, especially in that moment when she threatens and then kills the Dragon (though, honestly, I really think it would take more than a taser to kill a real dragon - on the other hand, could this work for other magical creatures? Maybe Hook should find a taser instead of coming after Rumple with his hook!)

Speaking of Hook - he's escaped and who knows where. That's pretty much it. No one seems that concerned. so yeah.

There was a very strong thread of redemption that ran through this episode. The most obvious thread being August's redemption, but we also see Emma and Henry's relationship revived and that tension resolved and, of course, Snow is desperate to see if August can be forgiven because she needs hope.

But for real. The song Snow was listening to while shooting arrows? A bit much. I love that she finally told David the truth (truth was another key theme this episode) and I loved David's response to it. Snow's look of horror when she slapped Geppetto was perfect and I really think that her tenderness toward what she has done is a strong sign that there is redemption possible for her.

I do have a bone to pick, though. All through the episode August could barely move. He's clunky and stiff and creaky and it's hard for him to walk through a room. Yet when Snow's arrow breaks off in him and she is what, 50 feet away tops, he is able to sprint back to the trailer fast enough that she doesn't see him at all? I know he was there to protect the town, but it is awfully hard for him to do that from the woods when no one knows he is there.

I'm also not entirely sure how you can use a taser on a wooden man. He doesn't have blood or a heart because he's an animated puppet. So how on earth does Tamara's attack work? (other than that it needs to for the story) And isn't wood not so great as an electricity conductor anyway? 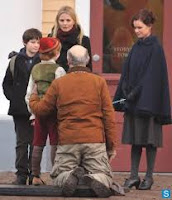 August becomes a little boy (WITH RED-BLONDE HAIR) again? No! I want my August back please. This is just not right. And I still don't understand how on earth that boy could possibly have grown up to look like that man.

I loved the touch with the postcard when August rode away from Neal, but BUT I really want to go back and watch the first part of the first episode because I really don't remember that guy looking ANYTHING like Neal.

And I'm pretty sure that the Tamara/GrOwen kiss was the grossest one since Cora and Sparkle Rumple made out a couple of episodes ago.

It was a good episode (though so sad no more August), but it definitely was more of a set up for the next couple of episodes than a great story in and of itself.

Really? 3 whole weeks before the next episode? Why do they insist on torturing us!?

So, did you see the Tamara/GrOwen thing coming? Did it take you completely by surprise? Do you like that the young, innocent Pinocchio gets a second chance at life? Are you wondering why all the dark brooding good looking men get killed off on this show? (it's a good thing David is neither dark nor brooding and Nealfire is a tiny bit goofy looking [you know I love him] or I would start worrying)
Are you tired of my questions and endless parentheses?
Posted by Rebecca T. at 1:22 AM

I was expecting Tamara to be "her" but I was skeeved out at GrOwen/Tamara kiss. I thought August was going to catch on fire when he was tased....so glad he's not dead...but sad he's the little boy again. Ahhh I miss working together so we can actually talk about this like we used to with Lost!