This week we make it back to Storeybrooke. Families are reunited, happy tears are shed, Pan plots deviously, and Emma just knows that something is rotten in the state of Denmark. In the flashback to the Enchanted Forest Charming just wants to go on his honeymoon while Snow is focused on getting a head - a gorgon head to be precise - so she can defeat Regina once and for all.

Is it just me or are the flashbacks getting less and less interesting? At this point we've seen enough of Snow and Charming's backstory that continuing to go back to it is feeling more forced. The moral of the flashback was so in your face that I found it a little bit hard to swallow. I also dislike the idea they seem to be trying to weave in that Snow has a dark streak in her from the beginning. Even Charming was pointing out her inconsistencies. And I just don't buy the baby explanation as answering all of her behavior there. I would also like to note that she looked ridiculous in that giant cloak when they first enter the spring palace (where there is miraculously no dust yet no servants either). But moving on!

I adored everything that happened in Storeybrooke. Belle and Rumple are so adorable and seeing Rumple as good yet wily makes me happy. He pulls it off in a way that Regina just never quite manages to do.

Hook proves that he simultaneously has good form and then insinuates that he and Tink have a little something going on, just to make Emma jealous. Poor form there sir. However, I did appreciate that he said he wanted to give Emma and Neal a chance. The thing he doesn't see is the thing that Emma finds herself trying to work through this episode - that she is the savior and that this fact will impact her entire life and all of her relationships. 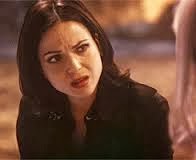 Regina is back on the wagon and trying to do the right thing. Snow starts things off on a good foot by pointing out all that Regina did to get them off the island, but I was really enjoying the evil-with-a-purpose Regina of the last several episodes and I hope we don't lose that. However, her passion for being a "good" mother was precisely what was needed in this episode. And it got her hurt and blinded her to the truth. That sounds like the perfect recipe for her to move back toward cold, evil Regina again to me. 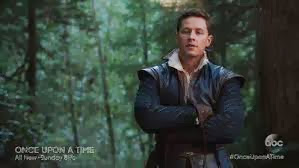 I kind of feel like I may be the only person left who is still a giant Charming fan, but I adore every scene he is in. I adore how affectionately exasperated he is with Snow and the way he really doesn't let her get away with everything. So going with her might seem like he's giving in, but he understands, just as he shows with Emma, that there are larger picture things and that he doesn't own or rule his wife or daughter. They have their own responsibilities, desires, and needs and he loves and trusts them to offer advice, let them know when he thinks they're making a mistake, but to also trust that they may sometimes see or understand something he doesn't. And if they screw up, he's not there to rub it in their faces, but to love and support them anyway.

Charming also had my favorite line of the episode. Again. When Emma asks if he's sure he isn't just trying to keep her away from Hook and he responds "You think I'm interested in Hook? Emma, I'm a married man!" Just ridiculous and the perfect lightness in that moment. He also had the line that covered the theme of the episode in the same conversation when he tells Emma: "There's more to life than just looking for the next fight."

Speaking of a fight. I really can't believe that the blue fairy is dead and I want to know why the shadow (which I am still dying to find out more about) went after her specifically. There has to be some magic in her shadow (remember all the purple sparks?) that will work toward the spell Pan is trying to perform. 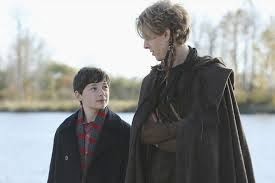 Also, I have to give some kudos to both the actor who plays Henry/Pan and the one who plays Pan/Henry. There were a couple of moments when Henry just nailed the creepy expression of Pan - particularly when he is looking around his old room. I love that he is getting a chance to branch out as an actor.

I also thought that Pan did a great job of exuding the simplicity and innocence that is Henry. After all of the intense creepiness of the last episodes, it shouldn't be so believable that he is Henry, but it totally is.

My final thought as I think about what is coming up in the winter finale is that Pan simply doesn't understand love. He sees it as a danger, a liability, a weakness. And, if everything goes as we've come to expect, love will be the thing that ultimately defeats him. What form that love will come in is still up in the air for me, but I am fairly certain that it is going to be the key.
Posted by Rebecca T. at 12:39 AM