Tonight we head back to the roots of the show with a quick flashback to the enchanted forest and a flashback to Regina's first days with baby Henry. Meanwhile on Neverland the band of misfits gangs together one last time to retrieve Henry's heart, defeat Pan, and make sure everyone, including the Lost Boys, can finally go home. With one unexpected little wrench in their plans. 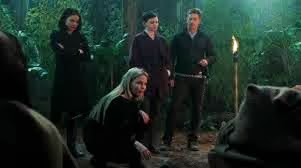 I actually found most of this episode to be a little bit disappointing. Emma turns the Lost Boys in a matter of moments, Regina breaks free and retrieves the heart a little too easily, and everything just goes too well, but in a sense of feeling inevitable rather than ominous. And the flashback was so obvious. Big surprise, Regina has a hard time being a mother. I think that the thing that frustrated me the most was how very hard every single second has been on Neverland leading to this point. Pan has always been about 8 steps ahead of them and then wham bang boom they get Henry's heart back, save Gold, and make it to the ship with everyone completely intact. Just too convenient, even with the marvelous twist at the end.

However, there were those few spots that really intrigued me and, of course, the last five minutes packed quite a wallop.

First I adored the quip between Regina and Gold at the beginning:
Regina: I need a child, Gold, and I need your help.
Rumple: Well I'm flattered, but uninterested.
Regina: NOT LIKE THAT.
I think I may have hurt myself from laughing over that one. The way Regina delivered that line was hilarious.

I have 2 big questions now - 1. How/when does Rumple remember everything or, the better question is actually when does he stop pretending that he doesn't remember. And was there a period of time when he is actually affected by the curse? I am trying to remember if this was dealt with in the past, but I don't think so.
2. What did Regina forget when she drank that potion and when or did it ever wear off? Because I can't think of any time that we have seen that she has appeared to not remember who and what she is or to not fear Emma and what she could mean for the curse as well as for Henry's heart.

Side note: One of the biggest frustrations I had was when Snow went for Pandora's Box. She is so much smarter than that! The three of them standing there arguing is just so idiotic I couldn't buy it. And Regina's reason for breaking free? Just. No.

Other side note: Somehow they managed to cast a baby that actually looks like Henry! I am just in awe at the casting people on this show! Though Pinocchio still stands out as a dismal failure. But anyway. Another perfect choice.

I would love to see some more flashbacks where we find out that Michael and John Darling have been behind the scenes of other incidents - as long as it's not carried tooooo far.

It was nice to see Rumple out of the box again.

But as soon as I saw the glowy eye exchange between Henry and Pan I had a feeling about what had happened. I hadn't quite formulated it exactly, but I knew something strange had happened so I was not surprised at the end. But at the same time I was also shocked at that turn - don't ask me how both are possible.

I adore this idea and I hate that they did this to Henry, but I can't wait to see him have a chance to act as something other than Henry. And I am dying to see the actor playing Pan do Henry. This is going to be crazy.

So the last bit of this episode totally made up for most of the rest.
Posted by Rebecca T. at 11:02 PM