Once Upon a Time - Heroes and Villains

So tonight is the last episode before the hiatus (I refuse to call it the mid-season finale because I despise that term - but that's another post and not for here) and everything's falling apart.

Fittingly titled, this episode leads us to a place where I think we've been heading for a long time. I'm still not sure what I think about dropping Ursula, Cruella, and Maleficent in like this, but it really does make sense.

Even here on this blog I've talked almost every week about this hero/villain dichotomy. And I think the most interesting thing we're going to see in the second half of the season is with the characters that now fall in a grey area. Namely Regina and Hook. Though I would really and truly love to see Ruby get in on this action. I mean, come on. She's the big bad wolf AND little red riding hood. *sigh*

Regina sacrificed her own happiness in order to save Marian. Basically every decision she has made in this season has been the choice of a hero. (Except for the whole magic mirror thing - what happened with that anyway?) And yet, she is without her true love. She's lost him. Forever. She may still have Henry and Emma and the Charmings, et al, but the chances of her finding another soul mate in Storeybrook are pretty slim. So what happens if the villains rise up to take their happy endings? Which side will she end up on?

The moment when Regina watches Robin cross that line and then slowly and deliberately tears up the picture and walks away was absolutely heart wrenching. It made me cry. I haven't always been the biggest Robin fan (never disliked, just never loved) but I wanted Regina to have what would make her happy. But then that raises the question - would Robin have made her happy? I guess we'll never know. But I do have to wonder what it will be like with Robin and Marian. She is going to have to look at him every day and know that he's only with her by default - that his love is with someone else? 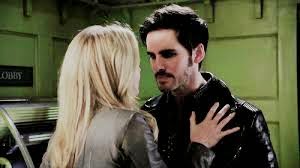 And Hook seems like he's actually living in his happy ending. He has Emma. She loves him and fights for him. So why do I have a feeling he's going to totally screw it all up? 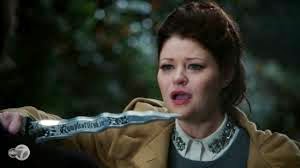 As for Rumple. Well, I will say that I've been saying this all season. He lost Belle so long ago. It just took her a while to wake up to that fact. He always has and, by all signs, always will choose power over her. She may be important to him, but he cannot have a happy ending as long as he chooses anything over her. And storming back to take a happy ending by force is not going to work because he will always have lost Belle.

In the flashback he tells Belle, "I could be much worse," and she responds, "But you're not."
This is true. But "not as bad" is not the same as "good."

More thoughts on the episode:

Was I the only one hoping Elsa would make sure that snow disappeared and didn't melt. Can you imagine the flood if that ice wall had simply melted away?

I can't even handle Henry calling Belle "Grandma" and apparently Belle couldn't either. I love when the writers poke a little fun at the bizarre and convoluted family relationships on this show.

I love that Emma knew that something was wrong with Killian. I just wanted her to follow him - to pursue it. But they did have a few things on their mind I suppose. But what would he have done for you? Hm? 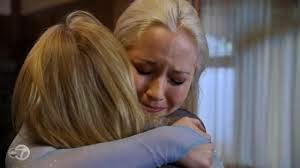 Elsa and Emma saying goodbye was a lot more touching than I would have expected. It was so sweet. 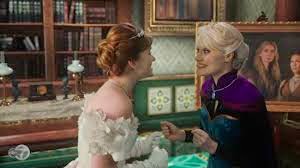 The casting on Elsa was pretty spectacular. Especially with her hair up like that she looks exactly like the ball scene in the movie. And I loved the little "chocolate" moment. So nice to see them getting a happy ending.

I love that Granny's serves shots.

And that's about all I have for today. It was an interesting episode that sets things up for what could be a fascinating second half of the season. I just hope they don't leave threads hanging all over the place and focus on the characters. This is where the good work of the show is and they've been neglecting it. Here's to it's return!

So what did you think? Are you looking forward to next season or are you a little scared about the villain squad's arrival?
Posted by Rebecca T. at 10:00 PM