Instead of my standard "10 Things" post I thought I would offer up a list of some of my favorite reads of this year. I've broken them up by age/format/genre (kind of) in an attempt to get a wide variety of books out here. And for some of the categories I simply couldn't pick just one, so I've offered a couple of options for your consideration.

1.  Picture Book: Sam and Dave Dig a Hole by Mac Barnett & Jon Klassen - I've been a fan of Jon Klassen for a while and so I keep an eye out for anything new he's done. He's one of those illustrators who writes brilliant picture books on his own (I Want My Hat Back and This is Not My Hat) but also collaborates well with other writers. This book follows the adventures of Sam and Dave (and their faithful four legged companion) as they dig for treasure in all the wrong places. The sight gags are what make this book so go pick up a copy and dig in. 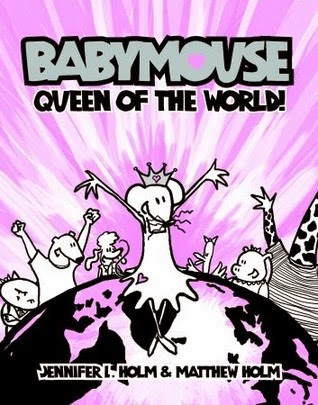 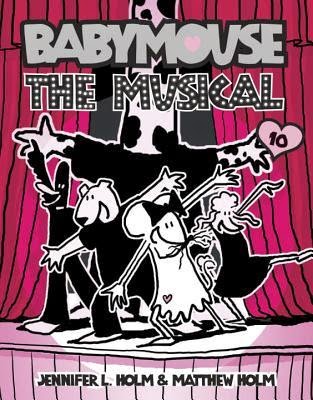 A. Babymouse by Jennifer L. Holm - This series is so much fun. They are graphic novels in predominantly pink, white, and black and they are sure to be a hit with many young (and not so young) readers. Babymouse tries so hard and life doesn't always go her way, but she's always trying and learning. Her wild imagination sweep her away in outrageously fun ways and her conversations with the narrator add the right touch of self-awareness that make the book enjoyable to a wide audience. (Queen of the World is the first in the series, but my personal favorite is Babymouse the Musical) 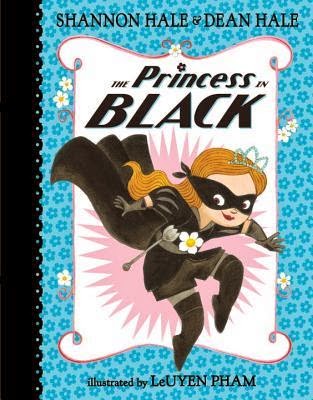 B. The Princess in Black by Shannon Hale and Dean Hale - Shannon Hale is another one of my favorite authors. I enjoy pretty much anything she does. This book came about (according to her) when her daughter said that princesses don't wear black, And so began the story of Princess Magnolia who is a princess with flouncy dresses and tea parties but who also has a secret identity as the Princess in Black. A fun story with the gentle message reminding us that we don't have to be defined by common perceptions or ideas of what we should be.

3. Middle Grade:
A. The Incorrigible Children of Ashton Place by Maryrose Wood - These books are a rollicking good time with mystery, adventure, and three adorable children who have a tendency to revert to their wolf-ish upbringings. See my 10 Things post about this series for more details.

B. Rump: The True Story of Rumplestiltskin by Liesl Shurtliff - I love a good fairy tale retelling (no, really? You never would have guessed!) and I particularly love the way this one turns the tale on its head and makes the "villain" the hero. See my 10 Things post about this book for more details.

4. Young Adult: This was seriously the hardest category for me because I read so many fantastic young adult books this year. SO MANY. Trying to narrow it down was pretty much the hardest thing I have had to do today.
A. All the Truth That's in Me by Julie Berry - Historical fiction with a beautiful and unique voice. This book blew me away and knocked Julie Berry even higher up my list of favorite authors. See my 10 Things post about this book for more details. 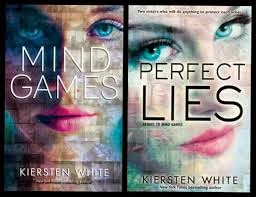 B. Mind Games & Perfect Lies by Kiersten White - This duology also included a unique voice. I love the way that Kiersten uses the syntax so brilliantly to illustrate Annie and Fia's mental state as well as their personalities. Annie and Fia are sisters who have been trapped by a company who said they wanted to help them, but is ultimately using them as weapons. The two books trace their battle to save each other (and others like them) without losing themselves along the way. 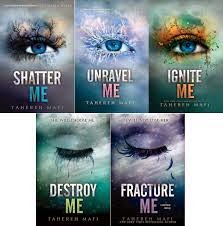 C. The Shatter Me series by Tahereh Mafi - I really debated about including these, but a top 10 list for me wouldn't be complete without Tahereh on it. And since Ignite Me, the conclusion to the trilogy came out this year, I had to include it. Shatter Me, Destroy Me, Unravel Me, Fracture Me, and Ignite Me (3 novels and 2 novellas) make up this dystopian trilogy that has been described as Hunger Games meets X-Men. But it's so much more. This is another series (I'm sensing a pattern) with a unique voice. Juliet is introduced as a broken, shattered girl who has grown up under the stigma of "monster." Her touch is lethal and she has been locked up to protect everyone from her. As she is first released from her physical prison, she also has to break through the mental and emotional prisons that have locked her in for so many years. You can see our book club review of Shatter Me or view my 10 Things post about Ignite Me (though spoilers for the first 2 books, obviously).

5. New Adult: Rainbow Rowell rocked this category for me and I'm including 2 of her books here. The first is Fangirl which our book club read and I thoroughly enjoyed. I love that college and early adulthood experiences are finally being explored in a more explicit way and Cath's story sucked me in. You can read our book club review for more details.

The second book is Attachments. Some people might not consider this to be a new adult book, but since it deals with early career/20-somethings I'm putting it here. I loved this book. So much. In this contemporary story, Lincoln's job is to check any e-mails that have been flagged with potentially inappropriate content. Best friends Beth and Jennifer's e-mails keep getting sent to him, but he gets caught up in their humor and their lives and before he realizes it he thinks he might also be in love. A really fantastic, funny, quirky story. I want to read it again right now, just from talking about it!

6. Adult: My reading list was a little thin here, but I have a couple of recommendations.
A. Honor Among Orcs by Amalia Dillin. This self-published fantasy is probably one of my favorite books of the year. I loved every single second of it and I'm so glad that Amalia found a way to get this into readers' hands. You can read a mini interview with Amalia and get a little taste of the book in my 10 Things post.

B. William Shakespeare's Star Wars: Verily, A New Hope by Ian Doescher - This book was brilliant. I can't even begin to express how impressed I was by Doescher's blending of Star Wars and Shakespeare. I would actually pay money to see this performed. I highly recommend this.

7. Manga: I've just recently jumped into this world, but I've had a lot of fun dabbling in it. One of, if not the first ones I picked up was the xxxHolic series by CLAMP. The series follows Watanuki, a teen who sees ghosts and spirits, as he tries to figure out how to use his gifts, and not be destroyed by them with the help of the mysterious Yuko, the annoying Domeki, and his crush Himawari. For those just jumping into the world of Manga I found this to be fairly easy to follow (though getting used to the right to left took a little time :) and an intriguing story grappling with the danger of wishing without thinking, fate, choice, friendship, and identity.

8. Novellas: Taming Fate by Amalia Dillin - This short novella is part of the Fate of the Gods trilogy. It provides a fascinating look at one of Eve's previous lives which is alluded to quite heavily throughout the series. I loved getting to see the characters a bit more. If you haven't read at least the first book it might not be the best place to start, but I highly recommend the trilogy and this additional installment, which is technically slated between the 2nd and 3rd books.

9. Audiobooks: Split by Swati Avasthi - I picked this up on a whim from the library. It is a young adult contemporary novel about sixteen-year-old Jace. The novel opens with him showing up on his older brother's doorstep having run away from home. As he and his brother try to reconnect and move forward they both find that they have to deal with the past first and the secret they've hidden for so long has to be faced if either of them can truly live their lives. This book is such an important one and it deals with a lot of issues people don't want to talk about, even in this day and age. And it handles it in a non-dismissive way, acknowledging the pain and difficulty while not making excuses or encouraging a sense of hopelessness as a victim. A fantastic read.

10. Non-Fiction: Jim Henson: The Biography by Brian Jay Jones - This was one of the most fascinating books I've ever read. I actually got this one on audio as well and the narrator was phenomenal. But whether you're listening or reading you're going to discover that Jim Henson was so much more than just "that Muppet guy" and if you're a fan of the Muppets, you're going to get a lot of behind the scenes trivia. Either way, I guarantee you'll be inspired to go watch (or rewatch) every movie or tv show Jim Henson was a part of. You can read our book club review for a little more information.

So there you have it! A nice categorized list to help you find those last gifts for that special someone. Or yourself :)
Posted by Rebecca T. at 10:00 AM