Juliette has spent her whole life on the outside. Her parents terrified of her, classmates avoiding her, teachers ignoring her. All because of something she can't control. Now she's been locked away from society in a cold, sterile room with only a tiny square of sky and her own words for company. She's been alone for so long that she can hardly cope when another prisoner is pushed into her cell. The boy scares and intrigues her and she can't help but hope that he remembers her like she remembers him. But his entrance into her solitude is only the beginning and soon Juliette finds herself swept up in a twisted mess of political intrigue, psychological manipulation, and emotional turmoil. Caught between two sides, fighting to control the power that has held her prisoner her whole life, Juliette has to decide how she wants to live her life and who she wants to live it with.

With gorgeous, poetic prose and a story line that pulls you into its grip and won't let go, this is a book you don't want to miss.

Want to own it?
Books-A-Million
Barnes & Noble
Chapters
Check out your local Indie store!
We don't support any particular name, but do ask that you support your local brick and mortar stores!

AND the paperback version (with the new absolutely fantabulous cover) comes out October 2nd, just a month away! and at the same time a between the novels novella called Destroy Me  from Warner's perspective comes out in e-book! All this to hold us over until the release of Unravel Me in February of 2013 (so far away!)

Here's what we thought about it

Rachelyons: I loved Shatter Me because it was different from a lot of other YA dystopian novels. Juliette's words were like poetry and allowed us to feel her pain and elation. I also hate/love Warner and can't wait to see where the story goes.

Jenn N: Tahereh does a wonderful job of putting you inside the mind of Juliette. You feel her fear and the confusion of her wrongful imprisonment right along with her. Her recovery from the ordeal is well paced and realistic. You'll cheer as Juliette learns to fight back and builds her self-esteem. The book's conclusion is a great surprise that sets up what is sure to be a fantastic sequel. Tahereh also does a great job of layering her characters - can Adam really be trusted? Is Warner truly evil? Read the book and decide for yourself.

Rebecca T: I got to know Tahereh via her blog and Twitter accounts pretty much as soon as she burst on the social media scene. She was (and still is) one of the funniest, most inspirational authors I've had the pleasure to meet (both online and in real life). So I was a little nervous about reading her book. There's always that fear that, no matter how much you love the author you might not like their books. But I was very happily proved wrong. From the first page I was sucked in and at times actually breathless wondering what would happen next. I've since read it at least twice more and each time I love it even more. The characters are vibrant and realistic, the prose gave me shivers, and the plot was filled with so many twists and turns that I am dying to get my hands on Unravel Me!

Eileen: I loved this book. It was refreshingly different from other dystopians. The prose was what really got me. The strange metaphors, incomplete thoughts, and strike outs made me understand Juliette's psyche more than I would have without. Overall the most engaging read I've encountered in quite some time. 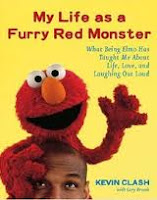 Next month we're going to be taking a step away from fiction to read Kevin Clash's memoir My Life as Furry Red Monster. Looking forward to something a bit different and to find out about the life of the man who brought Elmo to life.
Posted by Rebecca T. at 10:43 AM