So, someone asked if Wombly had fallen off the face of the earth as well. He did not, however, he did get stuck up on a shelf: 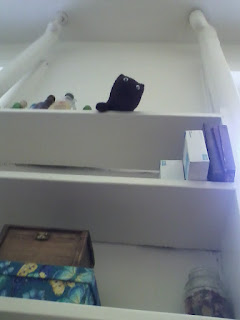 Or else he would have been writing my posts for me.  EXCEPT, last week he was busy helping me move into a new room. 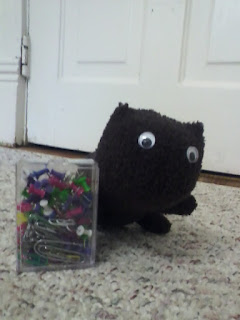 But once we were moved into our new space Wombly immediately wobbled over to the shelf and picked out a book and waited for me to come over and read with him. 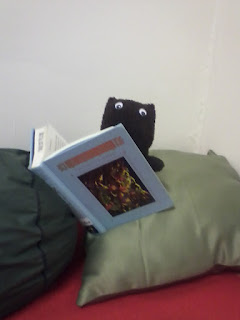 If you cannot tell, Wombly is holding the last book to Michael Buckley's series Sister's Grimm, A Council of Mirrors. SO, in honor of Wombly... 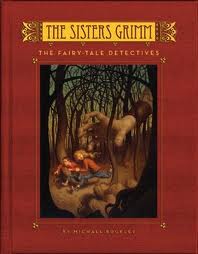 Sister's Grimm, I believe, is one of those under appreciated series.
It was put out by Amulet Books (an imprint of Abrams), artwork done by Peter Ferguson (I once bought a book just because Peter Ferguson was the illustrator.)

Sabrina and Daphne are sisters who have been orphaned. They have grown up in the foster care system and Sabrina has learned how to be sneaky in order to protect her sister as much as possible. The book begins when the sisters find out they have a relative: a grandmother who calls them lieblings (German for darlings, I believe). They find out they're related to the Brother's Grimm and are from a long line of fairy tale detectives. They now live in Ferryport Landing with their grandmother and her suspicious grouchy old man friend. AND, with a whole bunch of real to life fairy tale characters who are stuck for eternity in Ferryport Landing. Mayhem ensues. While Daphne loves meeting the fairy tale characters (especially the princesses) Sabrina is suspicious and looking for a way to escape. The journey of learning to be Grimm detectives continues through to The Inside Story: 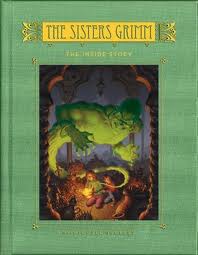 What I loved about this book is the development of Sabrina's character. This is her lowest point. This is where she doubts herself the most and is crying everywhere. With everything that happens in this series it's an appropriate response. It added a layer of realism into the book. Anyway. I also loved the concept of this book: Sabrina and Daphne, along with Puck (who is a recurring character), fall into the book of tales and walk through the stories of Oz and the Jungle Book. I love the idea of walking through stories and I just loved how Buckley wound everything together and twisted it all up.

Wombly and I have some favorite quotes from the book, but before we get into that I want to talk about the last book real quick: The Council of Mirrors.

First off: So, when Rebecca and I went to BEA with Jenn N. I noticed that Michael Buckley was going to be signing. SO, Rebecca and I didn't know this and we were so excited. We went to the Abrams booth and repeatedly jumped up and down and fan-girls loudly and it's embarassing to think about BUT anyway. SO, at home I have the signed copy that has my name in it so you cannot steal it because I love it so much and... Ahem. Anyway. So when I unpacked my books here in my dorm I realized DOOM UPON DOOM, I had not brought Michael Buckley's book with me, so I had to run to the library and find it. 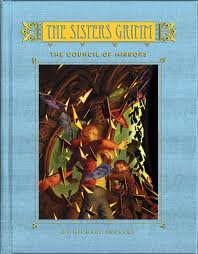 Second off: I was reading this while hanging out with a bunch of my friends. They were reading aloud bad romance novels and making fun of them (which, if you're a Down Under, you may want to wait to do such an activity) and here I was in the corner reading The Council of Mirrors and crying and trying to surreptitiously wipe away my tears. OHMYGOODNESS. It's so sad. But it ends well and is a satisfying end. AND I won't say more in case I should give anything away. BUT. You should read this series, especially if you like fairy tale re-do's, or detective stories. SO. Now onto some of my favorite quotes from The Inside Story. I would have written down favorite quotes from The Council of Mirrors as well, but I was too busy crying and trying not to garner attention.

"The words you say are insane," Puck said. "They come out of your mouth like regular words but make no sense." p. 167 (This is better in context, but it was definitely a laugh out loud moment for me. BUT, it could just be me.)

"The stained-glass shards came down like razor-sharp rainbows and there was no way to pass safely." p. 171.

"You are recollections and notions put down in words and sentences powered by a little bit of magic." p. 187

"The moon shone down on the water and its reflection danced like a ballerina." p. 191

SO, go find your own favorite quotes and moments. :) Have a good week Down Unders!

B&N
Books-A-Million
An Indie Bookstore Near You
Posted by Unknown at 7:49 AM