A couple of times when we've gone to Book Expo, we thought it would be fun to vote for book-ish superlatives. One year we did it during the event via Instagram, but this year that didn't happen.
So we pulled together this group post to give you a taste of what Jenn N, Rebecca T, and NaomiRuth found most and best of at this year's Book Expo.

Author You Were Most Looking Forward to Seeing:
Jenn N: The author I was most looking forward to meeting was Tess Gerritsen. I love the Rizzoli and Isles novels. Tess was there to promote her new standalone novel, Playing With Fire. She was so sweet. I'm so glad that I got to meet her.
NaomiRuth: Probably Linda Urban. (Although, I found out I could go like two days before and had no time to prepare, so I was mostly just excited to be there and super out of it). I met Linda Urban at a past BEA event (the bookseller speed-dating author event) and I have really enjoyed her books. She's coming out with a middle grade fantasy/adventure and she usually does contemporary fiction, so I'm interested to read Milo Speck, Accidental Agent.
Rebecca T: There were so many, but I think I probably squealed loudest when I saw that Rae Carson was going to be there. Walk on Earth a Stranger looks absolutely amazing. 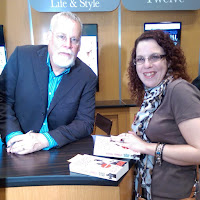 Best Surprise:
Jenn N: The best surprise was Michael Connelly. I'm in love with Mickey Haller aka The Lincoln Lawyer. So it was awesome to meet his creator. This signing wasn't listed in any of the BEA programs. I overheard someone on the Tess Gerritsen line talking about it and then got the details on Connelly's Twitter page.
NaomiRuth: Jon Klassen and Michael Buckley were both surprises (Michael Buckley is like always kept a secret, I don't know why. It's very strange). I love both of them and have such a respect for their work and for who they are as people, so I was really, really excited to see both of them.
Rebecca T: I have to second NaomiRuth's comment about Michael Buckley. Last year or the year before we happened to see in the PW Daily that he would be signing in booth the final book of the Sisters Grimm series. This year he wasn't on the schedule again, but we scoured the Daily and got very excited when we saw that he was indeed there again, signing his new YA novel. 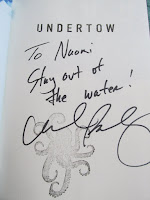 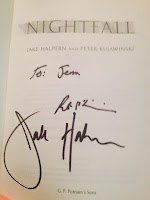 Jenn N: Peter Kujawinski co-author of Nightfall. He and his friend Jake were really nice though. They're apparently longtime friends like Jen and I are. We all had a little laugh together. Their personalities sold this book for me. I can't wait to read it.
NaomiRuth: Probably Michael Buckley? I don't know? 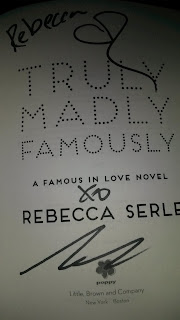 Rebecca T: I have to go with Rebecca Serle. She was amazing and even signed other books for people (I brought a copy of Famous in Love which she signed), along with the ARC of Truly Madly Famously (which I can't wait to read!).

Best Line You Stood In:
Jenn N: The best line I stood in was the 3 mile long line for Starbucks. I love macchiatos.
Just kidding (although I do love macchiatos). The best lines I stood in were those at the Harlequin booth. The carpet was nice and plush. The people who worked at the booth were friendly and everyone waiting in line with me was pleasantly chatty. Plus their signings were for multiple authors. So by standing on just one line, you got to meet several awesome authors all in one shot. You definitely need the Harlequin tote you received to carry ALL your new Harlequin books home.
NaomiRuth: The line for Annie Barrows because I met this lovely lady who has written a book and has a radio show, and it was just a very encouraging, engaging kind of conversation. I love being able to meet new people and to hear their stories! :D
Rebecca T: I think my favorite experience was on the line for Shannon Hale (of course she would bring the best people together!). A group of us chatted basically the whole time and we met an author and it was just a lot of fun.


Longest Line:
Jenn N: The longest line I stood on was for Celeste Ng. Apparently Jen and I weren't the only ones intrigued by the plot of Everything I Never Told You.
NaomiRuth: By size: Patrick Ness (but we got cut). By duration: Salina Yoon, no doubt about it. That line was like molasses on a Massachusetts winter day. She was super adorable though, so I'm glad I waited on it.
Rebecca T: I think the longest line I waited in by size was probably the Harlequin Teen line on Thursday, but I agree with NaomiRuth - Salina Yoon's line definitely took the longest. So long. But she was very nice and did a little drawing in everyone's book. 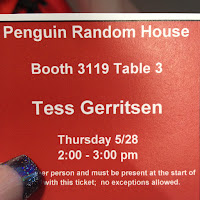 Most Organized Publishing House:
Jenn N: Penguin Random House was the most organized. Their in booth signings featured tickets that were handed out approximately one hour prior to the signing. They also had adequate space to queue up while you waited.
NaomiRuth: Abrams seemed pretty organized, from the line I stood in. I don't know. I was mostly just wandering around from booth to booth or following Rebecca around. It was a very surreal kind of day, so I don't remember a lot of it.
Rebecca T: I agree with Jenn N that Penguin Random House had their act together. They were the largest booth probably and were placed in the corner, which helped, but the tickets (to make sure they didn't run out of books) and the people they had directing traffic, breaking up the lines, and making sure aisles were kept clear did a fantastic job. 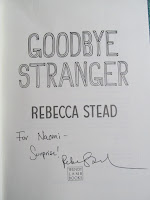 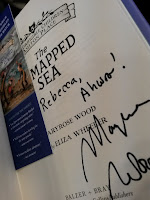 Jenn N: Not really cute, but I definitely got a chuckle out of Lauren Saft's inscription in my copy of Those Girls. "I hope your friends are nicer than these girls." I'm currently reading her book right now and, yeah - those girls are awful friends. Lol
NaomiRuth: Rebecca Stead's Rebecca T got this signed for me, so Stead wrote "Surprise!" Which is adorable.
Rebecca T: For me it's definitely Maryrose Wood. Not only was her signature very cute, but she also recognized our blog name and got excited to meet me, which completely and utterly made my day. 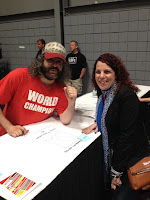 Jenn N: Is it too easy to say that Judah Freidlander was the funniest author? The stand up comic and former 30 Rock star was there to promote his upcoming collection of comics and sketches. He was sporting his trademark - a quirky trucker hat - and took time to pose for pictures and a brief chat with all his fans. He's super funny and super friendly.
NaomiRuth: The funniest author/illustrator moment I had was with Kenneth Oppel and Jon Klassen when I asked them if I could take a picture with them and Wombly and Oppel was concerned about what Wombly was. It was hilarious. Funniest author/illustrator just in general? Probably Michael Buckley. He was wandering around looking at the line and his publicist had to come running over and was herding him back to the front and he was shouting, "She always thinks I'm going to wander off and get lost." He cracked me up.
Rebecca T: Once again I have to agree with NaomiRuth. Kenneth Oppel and Jon Klassen were the most hilarious pair. Their reaction to Wombly and their banter with each other was adorable and hilarious.

Book You're Most Looking Forward to Reading:
Jenn N: It's so hard to pick just one book as the one I'm most excited about! If I have to choose just one I'd say Playing With Fire. I've only read Tess' Rizzoli and Isles books so I'm really interested in something different from her. Although I will miss the latest exploits of my girl Maura Isles.
NaomiRuth: Well, I already read The Nest by Kenneth Oppel and Jon Klassen (it was AMAZING and I almost cried and it was beautiful and I kept stroking all of the pictures) I started reading The Thing About Jellyfish by Ali Benjamin, so that's the one I'm most excited about right now. There are a lot of good books, though.
Rebecca T: Ah! So many! I think, though, that I'm most looking forward to Armada by Ernest Cline. I just loved Ready Player One so much and I'm dying to read this new one. Of course, I already did my Top 10 books I'm looking forward to reading, so you can go check that out, if you want to get a taste of more books we picked up at BEA.