Once Upon a Time - The Dark Swan

And we're back! Woohoo! Let's jump into the season premiere!

Tonight - well, tonight Emma faced the fact that she had become the Dark One. And fought against it as best she could while running around with Merida and trying not to listen to the creepy Rumple voice in her head. Meanwhile, the rest of the gang tried to figure out how to get back to the Enchanted Forest to help her (which involved a rather unconvincing set of plots involving Zelena). Oh, and of course, we discover that the dagger is actually part of Excalibur. Because why not.

So now we have lost time again, with a six week gap of memory loss to ensure the ability to have flashbacks. Because that's how Once rolls. 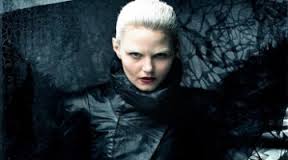 I thought Emma's costume was interesting - sort of faded, old and scraggly looking, which I guess was a reflection of her wavering in accepting her role as Dark One, yet not being the Savior anymore. I expected a bit more of her Dark One costume at the end though. It's a bit austere between the simplicity and the severeness of her hair. Also, not quite sure what I think about the rather dead way she's playing the Dark One. At least Rumple's Dark One had some pizzazz (a word that here means a creepy and annoying giggle and glittery skin) (sorry, I've been listening to A Series of Unfortunate Events recently and may be channeling a little Lemony Snicket).

It's really too bad they couldn't have sent Zelena to Oz before heading off to the Enchanted Forest. I'm so over that story line. And very much over her. Which I'm sure comes as a shock to anyone who has read any of my recaps from last season.

I found the various plots and intrigues around setting her free, tricking her into creating the portal and then recapturing her, etc to be a bit odd. And a bit too easy.

However! I love Killian and Henry plotting together, so let's have a lot more of that shall we thank you very much. 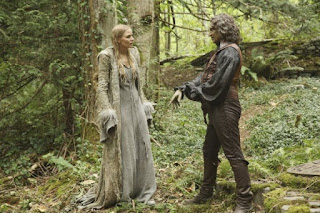 And how very excited was I when Leroy stormed into Granny's demanding to be part of the excursion? Yes! There needs to be much more of the tertiary characters. There has certainly not been enough of Grumpy Leroy.

I definitely agreed with Emma's decision to give the dagger to Regina. Honestly, probably one of the best choices she could have made. Because, even with all of the change for the better, Regina still has enough of the evil edge. However, it doesn't seem to have worked all that well. Let's see how Emma got it back.

And speaking of the dagger ... IT'S PART OF EXCALIBUR? WHAT? 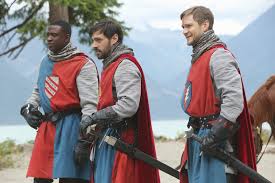 Quick question, why is Camelot in the Enchanted Forest - shouldn't it be in a different realm? Sometimes I'm not quite sure I understand the world logic on this show. Such as Brave also existing in the Enchanted Forest. What. I'm perfectly happy for all of those different things to exist in the world, but they shouldn't all exist in the same realm technically. I would think. But whatever.

A couple of other random thoughts:

Why is Emma's group going into the movie when it's basically over? I will never understand why this happens so often in tv shows. If someone is taking you to a movie, you don't show up for the last 10 minutes. That just doesn't make sense.

I love that Sneezy made himself sheriff by wearing Emma's coat.

Lancelot's delivery of the line "Your turn" after Sir Kay poofed into dust was perfect and hilarious.

When referring to the item significant to Emma: "I couldn't very well carry her yellow bug." 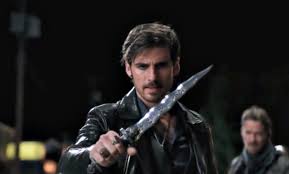 Talking about Emma being whisked away: "It's not like she rode off on a unicorn."

Any my personal favorite for the night to Hook as he held the dagger: "Put that thing down before you hurt yourself, Guyliner"

An interesting episode that sets up an interesting season, or at least half a season. I'm really curious as to whether Merida's story line will cross into theirs again or if it was a one time thing because they could. I'm hoping it was more than that, but not holding my breath. Also hoping Emma's Dark One gets a bit more ... Dark One-ish rather than cold fish-ish.

What did you think? I'd love to hear your take in the comments!
Posted by Rebecca T. at 9:29 PM

So glad these posts are back!

So I missed seeing the part with Excalibur and the dagger. I had helpful narration from my sister who saw it (I was getting a bowl of ice cream) so I'll have to go back and watch it again.

I was kind of annoyed with ColdDark Emma. I mean, I know we gotta go through the whole Dark One Emma thing because that's how the story is headed. But Rumple's Dark One had a bit of playfulness to it and though he was doing bad things, you couldn't help but laugh at him too. And even Regina when she was evil had a different approach to it. Maybe it's because we're used to seeing Emma in a different light but I just don't like it.

And I LOVED LOVED LOVED Grumpy! My Timehop this week showed me a tweet from last year where I was going on and on about Grumpy as Town Crier. And he did the same thing this year with, "It's a twister!" But I'm glad he stood up and said he wanted to go.

I was kind of sad that we had the whole "6 weeks later" and everyone was back. Because I wanted to see what life was like for them, but I know the flashback is a way to tell stories and I know it's coming.


And just one more thing...I do think it was smart to give Regina the dagger. Emma's reasoning behind it was right. But it also reminded me of when Emma asked Mulan to chop down the beanstalk if she didn't make it down while she and Mary Margaret were the Enchanted Forest. Because she knew that her mom would not make the choice to do anything that might harm her daughter.


Glad I got to see last night's episode!