Once Upon a Time - Ruby Slippers 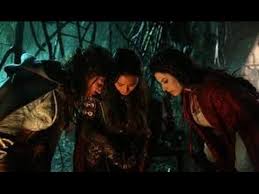 In tonight's episode Belle sets out to find a way to save her baby from Hades, Emma and the hero squad look for Auntie Em, and in a flashback to "sometime in the past" (I see that the writers have given up trying to make time work at all) Dorothy and Ruby try to find a way to defeat Zelena. Meanwhile David looks for a way to send Snow home to "chisel-chin Jr." (honestly Cruella has some amazing lines) and Hook comes to the rescue.

Okay, I'll start with the end - Zelena and Hades together? I mean, we saw it coming, so why did Zelena have to dither over it at all? No clue. When Hades comes to her at the beginning and she turns him down again I had to laugh at the way he said he could give her everything while handing her a dead rose. Because, yay, I'm sure she's always wanted one of those.

Hades' revenge on Auntie Em was harsh and when he tells Zelena that he did it only for her is a bunch of hogwash. He gets WAY more out of it like the crushing the spirit of everyone in his realm, ensuring that Emma and her group don't succeed in their current task, and preventing them from easily doing anything else to mess up his world. Plus the bonus of keeping Auntie Em there permanently. But no - he gets absolutely nothing out of it. uh huh. sure.

I'm super happy Belle realized that Rumple isn't her true love, but putting herself under the sleeping curse? I can't tell if that's brilliant or the stupidest thing she's ever done.

Speaking of brilliant/stupid plans, Killian and David's plan to get Snow home fits right in there. I knew that David couldn't go back yet, though, because he hadn't had the confrontation with James. Because we ALL knew that had to happen. I love that David and Killian worked together to figure it out. Now they just have to figure out how to get the names off altogether.

And I would just like to say that I would be more than happy for a David Charming to come into my life anytime now.
Posted by Rebecca T. at 9:49 PM