Once Upon a Time - Only You/An Untold Story

Sorry this is so late! I thought the finale was from 8-10, not 7-9, so I missed the first half and, since I only have antenna and ABC makes you wait 8 days to stream on their website I had to wait to watch it, and then I had a wedding, and then I just felt so incredibly uninspired by the episodes that I haven't really wanted to even write this. BUT here it goes - My last Once Upon a Time recap (yes, I know that the series is continuing with another season, but I have no desire to watch it anymore, even to make fun of it). So to all of those who have followed along with my ranting - thanks for reading! You'll have to tell me if anything absolutely ridiculous happens next season :) 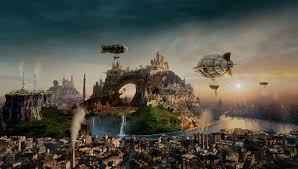 So in this season's finale people get sucked through a portal and trapped. Again. Because why not? Where they meet Dr. Jekyll and Mr. Hyde. I don't know why I'm surprised that we'd add another world at this point. And Emma decides that the best way to keep Regina safe is to... keep her out of everything? While Henry goes on an impulsive teenage mission to save everyone by destroying magic without thinking through the ramifications. And Rumple runs around chasing power somehow still believing that he's doing it for Belle.

I'm not really sure I understand Henry's sudden (very very very sudden) decision that all magic is evil and must be destroyed? I mean, this is the Henry who was just complaining about not being able to be all heroic and was finally figuring out how to use his gift as the author in a constructive way? Oh, wait. I forgot and was looking for some sort of consistency in the writing. hahahaha. 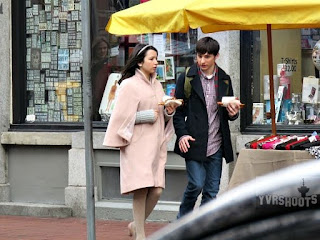 Henry and Violet are very adorable though. And I really liked getting some quality Henry time in on the story line, even if he was being reckless and heedless.

But. After Henry runs from Storybrooke to New York and Emma and Regina find him in the library, I cannot fathom what on earth would ever make them think that it would be okay to leave Henry and Violet alone in the library and that he would actually listen and stay put? Emma and Regina aren't that stupid, writers. I promise you that.

Side rant: I was really really ticked off that they gave the librarian the line, "people usually just want that YA stuff." First off, I 100% know that tons of people go to libraries for many many many other things than young adult literature. Second, I feel like that was really demeaning and dismissive to young adult literature - as though there is something wrong with wanting to read "YA stuff." That was totally uncalled for and unnecessary to anything related to the plot, story, or anything else.
/rant.

Also, did I miss something? How did Henry bring the pen back from the Underworld? Wasn't it destroyed? And if there are all of those other storybooks, then are there other authors floating around? Do they have an author club or Facebook page Henry could join to get some help?

And hasn't Henry heard just a few people on this show talk about doing things for "the greater good" when trying to justify a bad decision? Has he never read Harry Potter?!

I did like the revelation of how much Regina still struggles to keep herself on the good path. It was nice to see her show how much she has changed, because her first instinct now is to stop herself from doing anything evil. 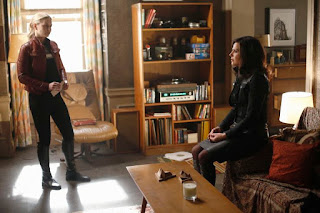 Which is why I'm so angry at how quickly Zelena turned so perfectly good. I mean, Zelena did things just as bad as the Evil Queen. So how is it that Regina has to fight constantly while Zelena is all prancing around being completely trusted 13 seconds after "resolving" her mommy issues? Her easy change completely undermines the real struggles that Regina and even Killian have fought through over the last seasons.

I did like the bonding moments between Regina and Emma and how Regina didn't automatically go all dark because Killian was brought back.

More on Regina in a moment.

There WERE some good quippy lines in this episode.

When Regina and Emma are going after Rumple and Emma says they don't have magic and Regina says, "I still have a fist." and Rumple's response: "Didn't you see the sign?" when they go into the room were delivered hilariously.

I also loved that when they find out people got pulled through a portal, Regina's just like "Again?" with more exasperation than any real surprise.

And when they're talking to Jekyll about why Hyde is bigger and stronger and he says the alter-ego presents itself how the mind perceives it's darker half, I about died laughing when Hook said, "Perhaps next time try an aggressive bunny rabbit." 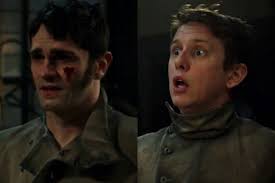 Speaking of Jekyll and Hyde (rolls eyes so hard I fall over backwards) I'm not sure I understand why there was the big struggle to keep Jekyll from drinking the potion - why did Hyde have to become Hyde first, if the whole point was for them to separate anyway? That made no sense to me whatsoever.

And I really don't understand Hyde's desire to turn Storybrooke into a refuge when that is quite literally (as they explain to us in one of the expository speeches) the purpose of steampunk world - a "place of refuge" for outcasts or runaways from other stories. Oops. Sorry, once again looking for some internal logic to the show.

And finally, Regina's spectacular decision to separate the two halves of herself. Gah.

First of all, Regina uses all of her talents to help people - even the ones she hones as the Evil Queen - how many times has her slyness or her ability to distance herself or even her ability to think like a villain helped to save lives? And the struggle she talks about is basically just called being human. 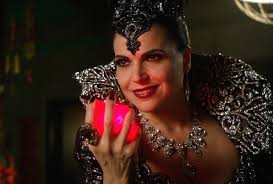 I understand that she's done horrible things, but all of those things are also what have brought her to where she is now. Henry wouldn't probably exist. She wouldn't have met Robin and enjoyed a brief period of happiness with him at all. She wouldn't be friends with Emma. SO much of Regina's personality is tied up in what she perceives as her evil self. It's Regina's conflict, her remembrance of what she's done, that helps her to be strong and survive and protect those she loves and do the right thing now!

Did anyone else notice her evil self sort of reach back in, like it was going after something inside her? I'm really afraid that Regina will have lost her spark, her self!

And, just throwing this out there, if you've only got one dose of that potion left, wouldn't it have been a better idea to give it to oh I don't know RUMPLE and then kill the dark side and leave the good side who would probably be able to wake Belle? Except that probably wouldn't work. But it seems to me a better idea than Regina taking it.

Of course, I guess we're due for more Regina time rather than more Rumple time, which, if I were watching next season, would probably excite me.

I would like to say that it was pretty obvious that the Evil Queen wasn't going to have been destroyed. I really felt like that was ridiculous and predictable. 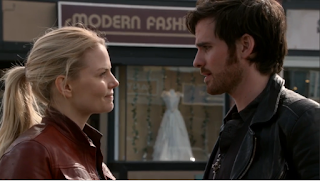 One final note - did anyone else notice the extremely obvious placement of the wedding dress between Hook and Emma when they were having their cute moment at the end of the episode? Because I was laughing so hard at it. And wondering if maybe they'll leave them alone just for a little bit next season.

And... there you have it. So. What were your thoughts? Are you intrigued enough to hang on for another season?

And once again, thank you to everyone who's come to read and comment or let me know on Facebook you're reading. You guys are what kept me going this season and I will now have to find a new show to recap next year!

May you all live happily ever after :)
Posted by Rebecca T. at 5:00 PM