As the holidays draw to a close, millions of mothers are hopefully packing away little satanic elves into  boxes for a year long hibernation. For those of you who don't know, I am referring to the Elf on a Shelf: the holiday tradition that consists of placing a small elf doll on various surfaces in a home with children. The elf is supposed to watch the children and report back to Santa. I first learned of this little custom two Christmases ago while working at Borders. Before working there I was blissfully unaware that this little monstrosity existed. (Before you ask, the Elf on a Shelf holiday set goes for $29.95. This includes the doll and a book) I learned that this is just one of the many ways that parents scare and threaten their children into being good for Christmas, and I personally think this is the cruelest method of all. For one, the elf looks like this: 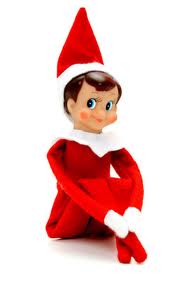 A naive child might be fooled by his rosy cheeks and whimsical outfit, but to me this elf looks as if he is plotting for world domination. If he is reporting back to Santa he's probably telling him your darkest and dirtiest secrets. Can't you see it in his eyes? Do parents really want such a shady character watching over their children? However, his eyes and gigantic cheeks are not the most disturbing part. Parents now have the option of purchasing a holiday skirt for their ... male elf? That's right, you can now take this creepy little doll and enhance that creepiness by dressing him in a skirt. I'm sure you'll all find this Elf a tad more comforting: 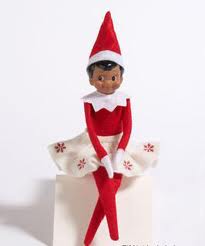 I bet you all can't wait to put this little darling on your mantle, right? Also, as you may have noticed, this elf has darker hair, skin, and eyes than the previous elf. This does not make selling these elves any easier. Which elf do you give a customer when they ask for the "normal elf"? Do I assume that a darker skinned person automatically wants a darker skinned elf, and vice versa? This elf not only makes me extremely uncomfortable, but it also makes me a racist. Therefore, I think this is one Christmas custom that needs to be put to rest. Everyone should gather their elves, cement them into their large white boxes, and throw them into the ocean. I think this is the only way to make sure we don't find ourselves with an Elvish revolution on our hands. However, the recent slew of new Elf on a Shelf merchandise, and the rate at which we sold these little jerks, guarantees we will be stuck with this tradition for years to come. I can assure you, though, that my children will not partake in this tomfoolery. I want visions of sugar plums, not nightmares of RuPaul the Elf, to dance in their heads.
~rachelyons
Posted by Rebecca T. at 10:29 AM

Email ThisBlogThis!Share to TwitterShare to FacebookShare to Pinterest
Labels: Christmas, elf on a shelf, rachelyons

Thank you :] I was nervous about my first post haha

Omg this is the most epic post ever! You should have taken the picture of the beheaded elf I had on my fb page too lol

LMAO, I had no idea that the elf had a skirt. Great piece Rachel :) Copperboom !

You read my mind! I hate the elf. I can't believe any loving parent would buy one of these.

You hit it out of the park your first time up at bat, Rachel. We definitely don't want an Elvish revolution (or is it Elven?). I've have kids for years, and the first I ever heard of the stalker on the shelf, or the malingerer on the mantle, was also at Borders. Creeped me out once I got a good look at it, because it reminded me of a murderous doll in an old Night Gallery episode.

I am so glad I still have never seen one of these things. Working upstairs in the calendar store saved me.

Why are so many children things so creepy??

hmmm perhaps it is Elven. either way, it would not be good for us.