10 Things I Loved About Uninvited by Sophie Jordan 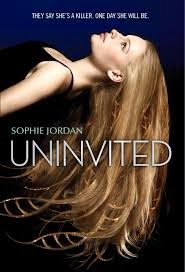 Davy has everything. A cute and attentive boyfriend, good friends, a loving family, and a full ride to Juilliard as soon as she graduates from high school. But the world around her is starting to crumble. Violence is on the rise and people are frantic to find a way to protect themselves and the rest of society from anyone who could harm them. Testing for the "kill gene" is becoming mandatory and is something Davy hasn't really thought about until her results come back positive. Suddenly she is a threat to her family, her friends, her classmates, and anyone else she might come in contact with. She's uninvited from her prestigious school, loses her scholarship, and is placed in a classroom with other kill gene positive teens where the concern is more about locking them up than letting them learn. The only bright spot, ironically, is Sean - the boy who wears his kill gene tattoos proudly but seems filled with contradictions. Can she ever accept her fate the way he has? As her entire world falls apart, Davy struggles to understand who or what she is. Could she really be the monster everyone suddenly sees? And what will she have to do to keep herself alive?

And if you want to see a really cool book trailer you should totally watch this before jumping into my spoiler filled 10 things list.