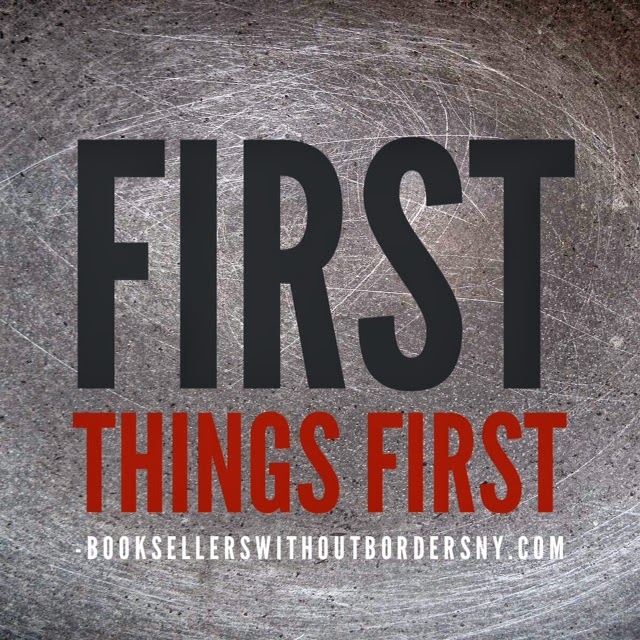 Happy March  and welcome back to "First Things First."  Each month I'll be reviewing the first book(s) in a long-standing series.  This month, I took a break from mystery thriller and re-visited my friend Alice McKinley.  "The Agony of Alice," is the first novel in Phyllis Reynolds Naylor's "Alice" series. 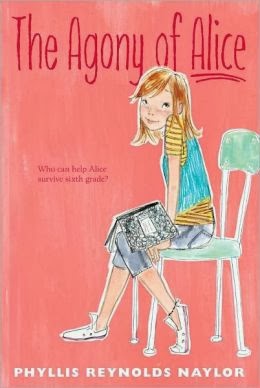 "Life, Alice McKinley feels, is just one big embarrassment. Here she is, about to be a teenager and she doesn't know how. It's worse for her than for anyone else, she believes, because she has no role model. Her mother has been dead for years. Help and advice can only come from her father, manager of a music store, and her nineteen-year-old brother, who is a slob. What do they know about being a teen age girl? What she needs, Alice decides, is a gorgeous woman who does everything right, as a roadmap, so to speak. If only she finds herself, when school begins, in the classroom of the beautiful sixth-grade teacher, Miss Cole, her troubles will be over. Unfortunately, she draws the homely, pear-shaped Mrs. Plotkin. One of Mrs. Plotkin's first assignments is for each member of the class to keep a journal of their thoughts and feelings. Alice calls hers "The Agony of Alice, " and in it she records all the embarrassing things that happen to her.

Through the school year, Alice has lots to record. She also comes to know the lovely Miss Cole, as well as Mrs. Plotkin. And she meets an aunt and a female cousin whom she has not really known before. Out of all this, to her amazement, comes a role model -- one that she would never have accepted before she made a few very important discoveries on her own, things no roadmap could have shown her. Alice moves on, ready to be a wise teenager." goodreads.com

Not only did I love "The Agony of Alice," I've read and love this entire series.  While "The Agony of Alice," was first published in 1985 and is geared for middle grade readers (age 9-12) I didn't stumble upon it until 2011.  I read "I Like Him, He Likes Her," which details Alice's freshman year in high school and featured the novels: "Alice Alone," "Simply Alice," and "Patiently Alice."  After I devoured that, I had to put first things first and see where the Alice series began.

While I read the entire series as adult, I found Alice's story to be very relate-able to my school days and in turn, I think tweens and teens could easily relate to her. Alice isn't a privileged Upper East Sider like the "Gossip Girl" gang, nor is she full of secrets and scandals like the "Pretty Little Liars" crew or in love with a vampire.  Alice is just a normal girl dealing with everyday life.  Phyllis Reynolds Naylor doesn't shy away from describing Alice's life experiences such as puberty and the awkwardness that comes with it.  There are many instances throughout this book and the series that I really empathized with Alice and recalled similar experiences.

As as adult I was also able to appreciate the life lessons in this series.  As Alice grows up and enters high-school, the relationships she and her friends engage in turn more serious and in some instances more physical.  Naylor does of good job of showcasing the realities and consequences of sexual relationships without coming off as preachy.

However, this series isn't all awkward moments and life lessons.  There are plenty of comical moments too such as when Alice's fashion challenged brother Lester tries to help her with back-to-school shopping, the pranks Alice's friends play on Lester, and Alice's attempts at playing matchmaker for her father and brother.

I also loved Alice's relationship with her father.  Mr. McKinley reminds me a lot of my dad.  He's easy-going, loves music and he and Alice can talk about anything and everything. 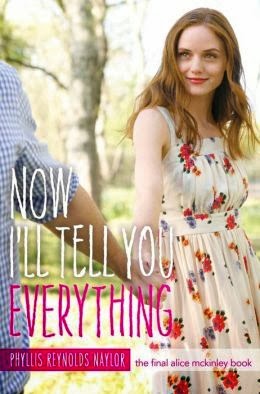 Last Fall, Phyllis Reynolds Naylor concluded the series with "Now, I'll Tell You Everything," which followed Alice from her college years until she turned 60.  It was a wonderful conclusion to a fantastic series.  I laughed and I cried just as I had through most books in this series.  You may also want to rewind the clock a little further and explore the prequel novels "Starting With Alice,"  "Alice in Blunderland," and "Lovingly Alice," which follow Alice from 3rd Grade through 5th.


If you haven't met Alice McKinley, I highly recommend you do and that you share the books with the teens and tweens in your life.  She's been a great friend to me and I'm sure she'll be one to you too.

If you've read any of the books in the "Alice" series, I'd love to hear your non-spoilery thoughts below.
Posted by Jenn N. at 9:00 AM