It's ba-ack! After an excruciatingly long hiatus our favorite fairy tale (and not-so-fairy-tale) characters have returned. Are we ready to find out what happened in the past year? Will Emma slap Hook again? Will Henry remember? Let's dive into what happened in tonight's episode. 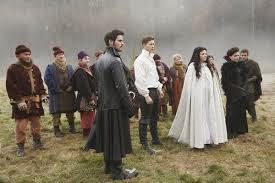 So tonight the band of characters find themselves back in the Enchanted Forest, Emma gets proposed to by a flying monkey, and Hook gets handcuffed.

I thought this was a great "premier" that sets the show up for a new direction and helps solve some of the issues from the first part of the season.
1. Henry's rapid growth is mitigated a little bit by the passage of a year, but he's gotten even older, hitting that growth spurt period and making him look a lot more mature.
2. The boring-ness of the flashbacks. Let's be honest - the flashbacks haven't been interesting for most of this season. Now we can still get the flashback, which has been a big part of the set up of the show, but it will be going back to this "missing" year in the Enchanted Forest as we find out how the Wicked Witch took over and what happened to our fairy tale cast.
3. Regina's storyline. For the first time in a long time I'm getting excited about the possibilities opening up for Regina. She's claiming her "self" - someone who can be manipulative, but who isn't truly evil. The thing that excites me the most is the return of Robin Hood and the pursuit of what was hinted at before.
4. Snow's pregnancy doesn't have to be hidden anymore. Thank goodness, because any more of those ridiculous cloak looks would have driven me crazy. Except I just realized that in the flashbacks they're still going to have to do the same thing. (also, did you notice that Aurora has managed to find Snow's giant white pregnancy cloak) 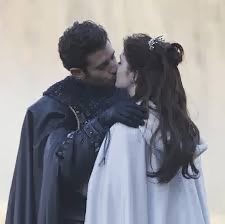 Speaking of Aurora - I was really upset with how weak she was in this episode. I really despise the way she behaves around Phillip. Instead of being a strong, intelligent woman, she becomes this damsel-in-distress who can't do anything on her own. I understand her concern for her child, but the Aurora I enjoyed before would never have sacrificed everyone else for her own safety.

Neal was breaking my heart in this episode, but it was neat to see him bonding with his "stepmother"? Belle and seeing Robin again. And, though I missed Rumple terribly, even in this one episode, I loved the hint we got that he might not be gone for good.

I absolutely adore the way Emma and Henry interact in their alterna-world. It's so wonderful to see them in a happy, healthy, good relationship with each other and I really hope that doesn't get lost. I do like the idea, however, that it will now be Emma trying to convince Henry that all of this is real and that fairy tales exist in a sort of strange reversal of the first season.

I would like to go on record saying that I never trusted Walsh for one second. I knew something was off and that he was most likely working for the Wicked Witch, but I wasn't quite expecting him to be a flying monkey.

I have another comment to make, but I don't want to spoil anything so if you haven't watched Harper's Island you should absolutely go binge watch it on Netflix and then come back and highlight the next section because I can't keep myself from making this next comment: When Walsh met Emma in the restaurant I yelled at the TV, "It's Henry from Harper's Island! Look out! Don't trust him, he's a serial killer!" And then I danced when it turned out she actually shouldn't have trusted him at all.

The best line of the night went to Emma when she says to Hook, "Drink the thing the crazy guy just gave me? No thanks." Love the snark.

I was surprised at how quickly (and easily) Emma remembered everything and I am very curious as to who made that memory potion for Hook. I want to know what happened to him after he left the band of fairy tale misfits in the Enchanted Forest. More fodder for future weeks I suppose.

I'm also very curious about why/how they all ended up back in Storebrooke. Other than wanting to reuse the sets. But where will this storyline go? The flashback of the missing year will be pretty obvious - unraveling everything that happened and how they got there. But what is the end goal of returning them? Just to get them out of the Enchanted Forest? What will drive the story in the present? I'm really quite curious.

All in all I thought it was a very promising start to the rest of the season and I'm a lot more excited for next week than I anticipated being.
What did you think? Love it? Hate it? Indifferent? What do you want (or not want) to see in the rest of the season?
Posted by Rebecca T. at 12:29 AM

Okay, so I know that Walsh ended up being the bad guy and all but I was thrilled in the beginning when I saw him on the TV. He's in one my favorite shows, Covert Affairs, and I ended up yelling, 'OMG! Emma's with Auggie!!!!!' But I must say that I am always excited for OUAT!!! thanks for the Post!!!