Tonight sacrifice hits our fairy tale friends once again as more father/son relationships get strained to the breaking point. Meanwhile Zelena feeds Snow suspicious orange juice and they finally find out that she is, in fact, wicked while Henry calls Emma out on her lies but only gets half-truths in return. 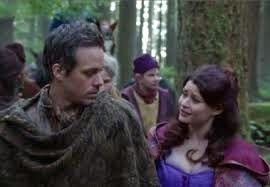 I honestly don't have a lot to say about this episode. The flashback was simply to get us caught up with why the present stuff was happening. Illuminating, but not particularly discussion worthy. I do love every scene that Belle and Neal are in together, but Belle's hair in the flashback was not working out. Another bizarre relationship that somehow works. I mean technically Neal is Belle's almost-step-son, and they pull that dynamic off well.

I loved that Emma told Regina to be careful, but Regina doesn't do much but flirt with Robin Hood. Maybe one of you can clear something up for me. I was sure that at some point Regina spent time with the merry men and (therefore) Robin after Tinker Bell set them up as "true loves" but maybe I'm remembering wrong? If it wasn't Regina, who was it (I know it was a female) who joined them?

I like the idea of them being "destined" for each other, but the story line is playing out very oddly, which is making me not like it.

That was a supremely awkward bro-mance moment between Hook and Neal. But then my sister pointed out that it is possible Hook knew that Neal's life was most likely lost and that's why he had to get his good-bye in. It was rather out of character so that would make sense. Especially if Hook knew (as he would) that there would be nothing he could do to stop Neal or save him.

Speaking of which, I can't handle the deaths on all my shows this second half of the season. I'm pretty sure they are all conspiring together to ruin my escapism with death and destruction. I really, really wanted to see things play out between Emma and Neal. I wanted to see more of him and Henry. Just more in general. I'm sad. Very sad.

There were a couple of great lines. I loved when Emma said, "A week ago Henry and I were playing video games and eating fruit roll ups. Now I'm chasing after the Dark One hoping he can help me find the Wicked Witch of the West." That line just wraps up the absurdity of the situation and why she is finding it so impossible to bring things up with Henry. How do you even begin to explain this - especially when she knows how she felt when Henry kept trying to convince her that fairy tales were real.

I also loved Neal's line, "I almost married a minion of my evil grandfather, Peter Pan, so I know what you're talking about." Ha. Just Ha.

I found it ridiculous that Neal suddenly doubles over the second that Emma learns about the symbol/key/price thing. Really?

An up and down episode for me. I want to know where all this goes, but can we please just chop Zelena's head off and move on?
Posted by Rebecca T. at 11:54 PM