In tonight's episode Charming faces his fears while Snow gets cozy with the evilest midwife ever. Regina and Henry share a moment with Regina acting distinctly un-evil-queen-like, and Rumplestiltskin is spinning crazy talk out on Dorothy's farm. In a brief and basically pointless flashback to the missing year, Rapunzel is locked in a tower and has to save herself.

I enjoyed having a Charming-centric episode as I feel like we haven't had one in ages, but there were just a lot of things that fell flat in the episode. Robin Hood's magical knowledge of the root that Charming charges after without thought, Zelena's awkward conversation with the Charming's in Storeybrooke, Hook's awkward conversation with Emma, Zelena's horrific giggles to Rumple that made me want to bang her head into a wall... 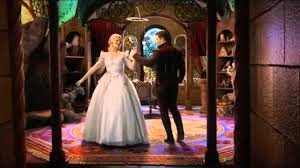 There were some real highlights though. One thing that has impressed me throughout the season is the way that Snow and Charming behave so parentally toward Emma. I mean, they're basically the same age and the Charming/Emma relationship in particular could so easily have an edge of creepiness to it. But the opening dream sequence was so brilliantly played and the filial love and pride Charming exudes is totally believable. I also, though it was a short bit, enjoyed seeing the actor get to play two different Charmings. I really appreciate it when an actor is given the opportunity to step out of the regular character, particularly when they do it well, which he does.

I love that Henry knows that something more is going on. His character is continually underestimated by everyone else and I would absolutely love it if he discovered the truth before they found a memory potion. 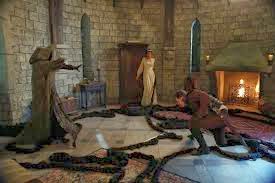 While I overall found the flashback to be redundant and rather pointless, I loved the idea of Rapunzel having gotten herself trapped rather than it being a result of her parent's thievery. I even like the concept of defeating your fears by facing it in physical form. I just felt like the flashback was merely info-dump so we would "understand" what was going on with Charming.

One thing came to light in this episode that illuminated an uneasiness I've had for some time. When Robin Hood tells Charming that the Nightroot is on the edge of Sherwood Forest not far from the castle everything clicked. I have no problems with there being different realms such as Neverland or Wonderland. But if this is so, then Robin Hood and his merry men and Sherwood Forest certainly belong in a different realm than the Enchanted Forest of fairy tales. I really have no issues with the blending of different tales and bringing in other characters than just fairy and folk tales, though I know that this annoys some people. What bothers me is the inconsistency. Robin Hood should not naturally inhabit the same world as Cinderella, Snow White, and Little Red Riding Hood. Robin Hood's world should be separate. Which is why, as much as I don't mind having him there, I wish they had 1) not had Sherwood Forest nearby 2) had some explanation as to how Robin Hood and his men got exiled to the Enchanted Forest.

Okay, so that's off my chest. 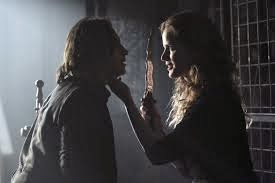 Here are my questions about the Wicked Witch or Zelena that came up over the course of this episode.
1) How did she get Rumple's dagger? and where?
2) How did she know that Rumple had the Nightroot (and couldn't we have come up with a better name than "Nightroot"?) and where, precisely, in all that crowded, cluttered shop he kept it?
3) So now that she has Charming's courage does that mean he doesn't? And is she holding Rumple so she can learn from him how to get a HEART? And is she going to get Dr. Whale to do a lobotomy on someone so she can get a BRAIN and have a matching Wizard of Oz set?!

I thought it was so fascinating having Regina of all people be the one to tell Henry about the wonders of family and the joys of a small town where everyone knows you and is part of your life. It was amazingly sweet in a way that I hadn't anticipated. I'm liking her a lot more recently.

Hook on the other hand (heh) was getting on my nerves big time throughout the episode. I kept yelling at him to just back off and chill out. He is not helping his cause in any way shape or form and the brooding is getting in the way of him being the snarky brigand we all love. I hope we get some clarification on what he went through in the past year and that he works through this whiny broody stage before I'm ready to throw him back to Neverland for good.