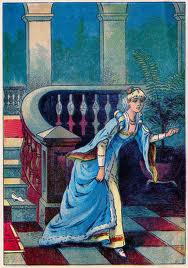 Of all the fairy tales I think Cinderella is probably one of the most widely recognized and adapted. It's one of those rags to riches stories that just seems to latch onto people's imaginations. The idea for Cinderella has been around for a very long time and most versions share several consistent features. 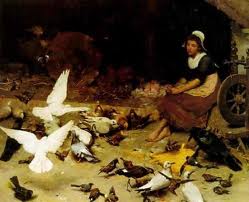 Cinderella has a stepmother, an evil one who persecutes her and forces her to work as a servant/slave, and usually at least one stepsister - often two.


Cinderella gets outside help - whether from a tree near her mother's grave or a fairy godmother or a magic bull (in the Norwegian version). She also almost always receives help from woodland creatures such as mice or, particularly, birds. 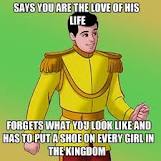 Cinderella disguises herself in some way so the prince cannot recognize her when she isn't wearing her finery.

Cinderella loses her shoe and it is only through putting the shoe back on that the prince can recognize her and claim her as his rightful love. (Anybody else wonder if her feet were really so tiny that no other person in the ENTIRE kingdom could possibly fit into the shoe?! No? Just me? All righty then.)

But even these are not necessarily consistent across the board and there are so very many variations that it's not even possible to sum them up here. If you're interested, check out this site - you can read some of the different versions from all over the world.

And, get this, the shoe isn't always glass. I know. I just ruined your life. Sometimes it's fur, sometimes gold, sometimes diamond, and sometimes it is glass. But in almost all versions there are 3 balls, not just one, and it's only at the last one that Cinderella manages to lose her slipper.

Most versions are a lot more violent than most people familiar with the popular children's versions know. In several versions, including the Grimm's tale, the stepsisters cut off parts of their feet to wedge them into the slipper. As the prince leads them away to be his bride (sometimes knowing she is not his love, sometimes fairly oblivious) Cinderella's bird friends have to point out the BLOOD TRAIL behind them as proof that she is a false bride. Ew. And in several versions, once the prince finally does find Cinderella (but seriously, if he couldn't tell who she was without the shoe, is he really worth it?) she walks to the church with a bird on each shoulder. Her stepsisters walk on either side and on the way to the church the birds peck out one eye and on the way out of the church the birds peck out their other eyes. Again. EW! Can you imagine that in the Disney version?

(Someone please write a zombie version of this fairy tale. I think I would love you forever)
Of course, those are just the variations of the folk tales - we haven't even touched on the adaptations that have been written and produced. You didn't have anything to do, right? I can keep you here for a couple hours? Oh, good :)

Here's a sampling of some of my favorite retellings:

Ella Enchanted by Gail Carson Levine. Basically, if it is written by Levine you should read it. I think this is true of all her books. Ever. I love her sense of humor and I am telling you almost no one can retell a well known story in such an unexpected way. The movie was cute, but the book? SO much better (imo). Ella is under a curse - a curse that makes her obey a direct command. From anyone. The characters are fun and believable, but it's the world-building that blows me away. It's so richly developed in such a short span of time.

Princess of Glass by Jessica Day George. This is actually the sequel to Princess of the Midnight Ball (a retelling of the Twelve Dancing Princesses), but you can totally read it as a stand alone. Both of these books blew me away. I love her style so much.

Then there's the Once Upon a Time series, which is a series of retellings of various fairy tales. Before Midnight was a lyric retelling of Cinderella by one of my favorite of the series' authors, Cameron Dokey. All of these books are really fun, fast reads that put some interesting spins on familiar tales.

Don't forget about one of the newest retellings Cinder by Marissa Meyer. I haven't had a chance to read this myself yet, but it looks amazing and I've heard fantastic things about it. In this version, Cinderella is ... a cyborg. Yup.

Or, if you'd rather get the ugly stepsister's side of the story you can try Gregory Maguire's Confessions of an Ugly Stepsister. It's told in Maguire's rich and fairly dense prose, but a really interesting story from the other side.

And I'm such a movie lover I have to throw out a couple of my favorites here too.

One of my all time favorites is Ever After with Drew Barrymore. The character development is really well done and I think the second stepsister is adorable and probably my favorite character in the movie.

Of course I'm sure I've missed many. What are some of your favorite book or movie adaptations? Do tell!
Posted by Rebecca T. at 7:00 AM