Terry Pratchett: One of Those Awesome British Writers 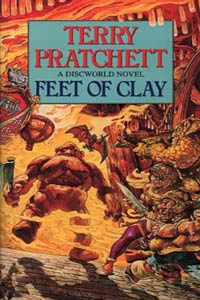 I don't know why, but I have a thing for male British writers. Maybe the accent comes over in the writing? Maybe it's the humor? Maybe it's the pure awesomeness of British people? Either way, Terry Pratchett has definitely become one of my favorites. I stumbled across his name through one of my blogger friends and he recommended Feet of Clay. I got it from the library and stared at it and hummed and hawed and poked it with my finger. I very rarely read adult books. I have numerous reasons for this. So. I wasn't really interested. But then I got sick and it was the only book within grabbing distance and I wasn't about to get up looking for anything, so I started reading it.

Terry Pratchett is hilarious. And for those of you, like me, don't like sexy-sexy times in books (or at least, some people don't like that all of the time) I was excited that it was clean. I could read it without freaking out and throwing the book across the room. And I laughed! And it took me awhile because I was sick and it was thick and I kept having to stop so I could moan and groan in agony, because that's what one does when one is sick, but I finished it and I wanted to read them ALL. And there's a whole lot to choose from. Next I read Eric, because it was short and looked like it was making fun of Faust, which is always exciting. 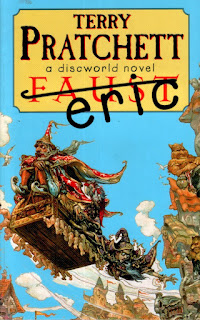 And it included time travel and bad magicians (bad meaning not very good at being a magician, not meaning necessarily evil EVIL!, though maybe yes to morally ambiguous) and they go to Hell, and Death is involved, and Death is a wonderful, wonderful character.
I'm reading the Color of Magic now, which is very interesting because it is the official first book in the Discworld series. I watched the super long movie based on it and its sequel (it had Sean Austin in it which was WEIRD), and that's always fun to see the differences therein.

So, if them being hilarious and British isn't enough for you, I have more reasons! You don't have to read them in order. You can just pick them up and read them willy nilly. You don't have to read them all. You can stop and start and go bananas crazy, or only read one and never again. ALSO. The world is on top of a turtle. How awesome is that? Completely awesome. You know you wish your world was on top of a turtle. Like this: 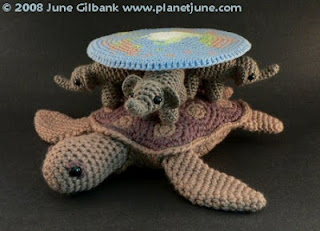 This wonderful woman created an Amigarumi Discworld.
It is beautiful.
Posted by Unknown at 9:47 PM

well now since you posted about it i guess i will have to read it:)

I love that when I read your writing, I can hear you talking. :)