Are the odds ever in our favor? 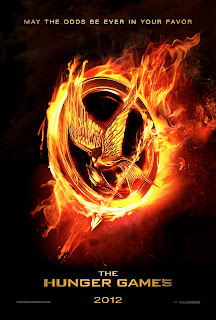 At 12AM on March 23, 2012, our group will be gathering at a local theater to see the much-discussed and long awaited "Hunger Games," movie.   This will be the first film based off of Suzanne Collins' best-selling dystopian trilogy wherein teenagers are forced into a death match by their tyrannical government.

While gritty and dark, this series has been praised by my former co-workers, and now fellow bloggers, for years.  At first I was reluctant to read such a dark tale but as soon I picked up "The Hunger Games," and started reading, I couldn't put it down.  It's not just a bleak tale, it's about fighting not just against a bad government but fighting to be yourself and fighting for what you believe is right, just and moral.

So, this book to film adaptation, needs to be done just right.  We've all seen the trailers and you can view the trailers, here.  As of late, our discussion has been on whether this film will due justice to the novels.  We thought we'd share our discussion with you.

Rachel, who I believe was the first of us to read the series weighs in, "I'm excited and dreading the movie at the same time. I just hope they keep the integrity of the story and don't try to glam it up. Also, this is not a love story. I hope they don't play up the 'omg Peeta and Gale are sooOoOo dreamy' aspect. I also wish we were in Katniss's head for the movie and I'm pissed that they're leaving out Madge. How would Katniss have the money to buy the mockingjay pin? And even if she had the mone,y she wouldn't buy it because it wouldn't be benefiting her family. The reaping scene looks spot on, though."

There is an article about "The Hunger Games" in this week's "Entertainment Weekly",  which notes that producers were determined to the relationships between Peeta, Gale, and Katniss as described in the novel.

I think we can all agree with Claire's reaction, "I am relieved to hear there is no playing up of the 'love' of Peeta and Katniss. I saw the scene for the reaping and it looks amazing. I can't wait to see the arena and the people watching and in the games."

Eileen is, "...extremely curious about the entire film. My first thought was it's going to be too far away from the story and too Hollywood-ized. But since Suzanne Collins wrote the script I'm not sure what to expect. I'm most excited to see how they visualized the arena."

Naomi is also, "I am excited about it all...I most want to see Rue's scene. If they mess that up I'm going to find their butts and kick 'em. If they do it right I shall pat their heads in appreciation."

Rebecca shares in her sister's opinion," I am so excited for every part of this movie! After something I read today, I'm especially looking forward to some of the things we'll see inside the capitol and the games that we don't get in the books since Katniss doesn't see it.  Every video clip I've seen makes me cry, so I'm most concerned about bringing enough tissues to the theater!"

I am excited to share an evening with my good friends and enjoy the freedoms not allowed in the bleak future described in these novels.  I was also glad they weren't going to soup up the romance factor between Peeta and Katniss or Katniss and Gale.  I think the film will showcase just how horrific and intense the battles and oppression were described in the novel.  Also, even though you shouldn't like those in "the Capitol," I must admit their costumes, hair, and make-up are beautiful !

So what do you guys think?  Please share with us below.  Even if it's a snarky comment, it's OK!  We have snark in our own group.  This is what Alan had to say when asked what he liked about "The Hunger Games, "I like the part where the zombie steals the shuttlecraft and tries to fly it into a black hole, but Peeta crushes it's skull with a Dymo label maker."

I can't take credit for this! Rebecca told me about them first, of course. I'm just the most vocal about it haha

I have always aspired to snarky.

I am always happy to help one achieve their personal snark goals.

Yes, I gladly claim credit for forcing this series on every single person I could :) But Rachel definitely jumped on the band wagon with all her gusto!

I think everyone convinced me to read this series. I was too stressed at first to start it but once the huge turmoil left our store I was able to start again and enjoy it! Now I got my sister to read them, and Divergent ;)