2.11 "The Outsider"
This week Rumple becomes likable again as he gets a little evil, struggles to live up to Belle's high opinion of him, and fights to go find his son. Belle proves to be another fantastic female character addition to the cast with impassioned speeches, book weaponry, and a little bit of fairy dust.

Hook goes on a revenge rampage and totally rocks the manscara while Cora (and Regina) are conspicuously absent.

Archie comes back from the dead, Pongo is adorable, and David and Snow want to get their own apartment. Or, you know, go back to fairy tale world. 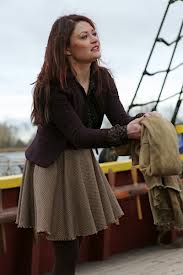 I loved Belle in this episode so very much. I liked her last season and she's been okay thus far this season, but she totally kicked it this episode. She's probably edging into my top female character though Ruby's been up there for a while.

When she pushed that bookshelf over onto Hook all I could think was this:

When she was on the phone with Rumple I was rolling my eyes because if they had cellphones from this century she could have like texted him. I guess Storeybrooke isn't big on technological advancement.

Also, why the hay bale did Hook just leave when Belle was trapped in the elevator. He had to guess that Rumple would show up - it didn't make any sense to me. At all. Any thoughts?

Grumpy is adorable and so is Belle and I loved his pep talk encouraging her to go of and have an adventure.

On a clothing note - I loved Belle's skirt in Storybrooke, but that adventuring shirt had to be super uncomfortable. I don't think you need that much cleavage to hunt down a fiery demon beast.

And speaking of tracking down a monster, I want Mulan pushed off a cliff in the flashbacks too. It's driving me crazy that she's just tacked on to everyone else's story! Gah! Give her a decent storyline or just let her go. Please.

That was a freaking large amount of fairy dust. Did she really need to use all of it like that? Isn't it kind of hard to get?

And of course, it's Beauty and the Beast all over again. I'm not sure what I think about Prince Philip being back. I would rather see more Aurora, but of course in the flashback she's under the sleeping curse, though I think sleeping she would still be more interesting than Mulan. Okay, sorry. If you like Mulan please tell me why - I would love to get another opinion. Really! 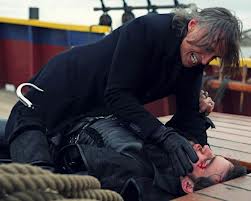 I really do like evil, manipulative Rumple MUCH better than the tame one. But at the same time I loved how emotional he got about Belle's safety and I love how he is trying to change because of her. I'm feeling very contradictory about his character this season.

Dude. The magic ship shield was so cool. I love how Belle found it and freed Archie and is just smart and cute. And so protective of Rumple.

Also, so happy Archie is NOT DEAD! Yeah!

I found it a little weird that Emma is the one resistant to the idea of David and Snow getting their own place. And I really don't like the idea of them going back to fairy tale world. Apparently Snow and Emma haven't talked about the horrors of their trip and how terrible everything is. I can understand where other people are coming from but .... I also don't know why David is so gung-ho about the idea.

Okay. First I have a calm and composed question and then I will freak out about the last 5 minutes of the episode.

What happens if the person takes off the charmed object - e.g. if Smee takes off his hat or loses it? Would he lose his memories along with it? Does that mean Rumple would need to walk around everywhere with the shawl draped over his shoulders a la Arthur Dent as long as he was outside the town limits?

I really thought for a moment that Rumple was going to lose his memories and I was freaked out/kind of excited to see what they would do with that. 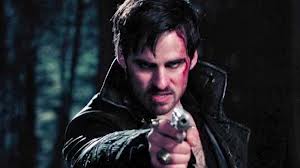 I was watching this by myself - my brother and his girlfriend were downstairs. I am pretty sure they thought the house had caught fire or something from my ear-piercing scream of NOOOOO NONONONONONO because that happened. Literally screamed. Not Belle! NOT BELLE!

Then I shrieked NOT HOOK!

And (I take notes while I'm watching so I can keep my thoughts together for these posts) this is what happened on my keyboard:

So yeah. Really not able to anything right now. My hands are actually shaking thinking about it.

Not that I get caught up in the fictional worlds of tv shows or anything.