I had to work my day job on Monday, a federal holiday.  It was a bit of a bummer not being able to sleep in but then I got a piece of news that lifted my spirits.  The fourth book in Tiffany Reisz' "Original Sinners," series received a release date and the cover was revealed. 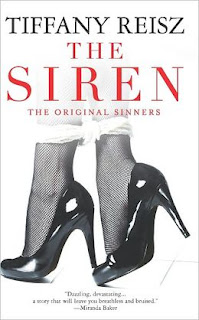 For those unfamiliar with the "Original Sinners," let me introduce you to the best series that I've read in some time.  In "The Siren," the first novel in the series, we first meet Nora Sutherlin an erotic author and part-time professional dominant.  She is determined to make her latest novel her most successful to date in both sales and style so she is pleased to be working with accomplished editor, Zach.  Meanwhile Zach isn't as pleased by the situation as he feels he should be working on more scholarly and sophisticated work plus he's dealing with his crumbling marriage.  Then there is Nora's virginal roommate Wesley who is madly in love with her despite their age difference and lifestyle differences.  Unfortunately for him, Nora's heart still burns for her ex, Soren despite trying to put their passionate and sometimes tormented relationship behind her.

What makes this novel different from other erotica that I've read is the depth of all the characters.  Each personality is clear, distinct, full of life, heart and passion.  The premise of a book within a book and flashbacks to different points in time develop the novel into the first entry of what is quickly becoming an epic serial.  Soren also has one heck of a secret, it's not what you'd expect.  It's wild and gives his character and the story a whole other level intrigue and complications.

The subsequent books in the series, "The Angel," and "The Prince," continue to build on all the characters relationships with each other. Plus new characters and secrets are introduced. To say much more would spoil the whole thing.  I will warn you that "The Prince" ends on a dramatic cliffhanger that will leave you begging for July 30th to be here tomorrow.

My best friend gave me this series as a Christmas gift and I read the first three books in a week.  Everyone that I've personally recommended the series to has done the same.  Seriously, go get these books, you won't be sorry.  This series is like nothing you've ever read.  Ms. Reisz will probably spoil you from other erotica as nothing can compare.  So, go get them and then come back here and let's chat about them.  I'd love to meet more "original sinners."
Posted by Jenn N. at 8:00 AM