Fairy Interesting: OUAT: In the Name of the Brother

Also, Rumple actually makes us feel sorry for him. And he and Belle-who-has-forgotten-everything have a heart breaking scene.

Nothing else really happens and a lot of people have epically bad lines of dialogue. Though Snow does have some cute moments.


ahem.
In case you couldn't tell, I wasn't really a fan of tonight's episode. I just really, really, REALLY don't care at all about Dr. Whale. He is completely uninspiring and has been given all but zero screen time (especially in the first season) so a whole episode about him seemed completely pointless to me. There are many other things I would have liked to see ... like maybe we could finally get a Leroy episode? Or how about bringing back someone interesting like Jefferson. Or at least having something that had anything to do with either the Belle/Rumple crisis - you know, like the dwarf who already lost his memory (that was a dwarf wasn't it?) - or the Cora/Regina thing (which was mind-numbingly more boring than it really should have been).

There were bits and pieces that I did enjoy, though. Really.


I love that Leroy is part of the whole "council" that has formed. Seriously. Can we just see him back together with the pink fairy? And can we also find out where Rumple got that pink wand he used to suck out all the fairy dust to close the portal?


Sidenote: I've been rewatching Lost (because it is an amazing show that deserves rewatching) and that shot of Dr. Whale through the window all disheveled and drinking totally had a "Jack" vibe to it.

Two giant sighs of relief when neither Belle nor Hook were seriously injured, but 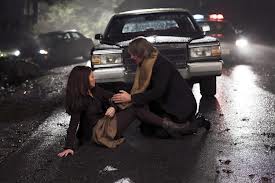 Um, but didn't he just tell Belle that he only had enough of that potion stuff to enchant one object and that's why she couldn't come with him? And now he's magicked up the cup? And now he randomly wants Emma to come with him on his quest? But we'll come back to that.

And Mary Margaret is hilariously adorable when she's all impatient and annoyed.

I DO like this idea of a stranger coming to town who sees what he's not supposed to see, but I'm betting he's not just some random guy. (this IS Storeybrooke after all) And his Star Wars ringtone cracked me up. And vague much with the name "Her" to make us believe the her is someone important, which it probably is, but could just be a red herring.

Poor Hook got sidelined again. He couldn't have had less to do in this episode *sigh*

As much as I could not have been less invested in Frankenstein's story, I did like the twist of his brother being the monster - and the family dynamics of the brother being the only one who really believed in him was nice as well.

Though I do have to say that I don't understand why there were stitches on the brother's HAND. There was nothing wrong with his hand, so why did it have to get cut open and stitched back together?!

The color effects with Rumple in Frankenstein's world were pretty cool too.

And I ALSO liked the way Henry picks up on the fact that there are non-fairy-tale people popping up in town, but he should have gotten that with the Mad Hatter. After all, Alice in Wonderland is not a Grimm fairy tale (though it has "magic" in a way Frankenstein doesn't).

I am guessing (hoping) that more about these different realms is going to become increasingly important (remember how Rumple was looking for the shoes from Oz too?) - maybe as the townsfolk look for a new place to live? 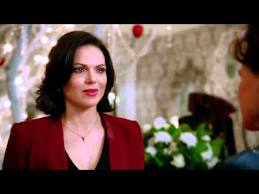 First, she makes my skin crawl perpetually.
Second, sniffing Regina's clothes was pretty much the epitome of CREEPINESS.
Third, "for you, anything" was WAY too sappy. I can't even handle this "I'm going to turn my life around for my child and be completely polar opposite to what my entire character has been to this point" thing. Regina was finally starting to kind of be able to pull it off. Cora. NOT BUYING IT. So she'd better have some super evil plan going on or I'm going to toss my cookies.

AND winner of worst line of the episode goes, unfortunately, to one of my favorite characters when Ruby says to Whale: "I ate my boyfriend" Really? Really?!

Jumping back to Rumple for the ending here...

I have to reiterate that the moment Belle shatters the cup and Rumple's reaction to that was So heart-rending. I love the way you can absolutely hate a character and then feel incredibly sorry for them in the same episode on this show!

Was it just me or did the drop of blood that showed Rumple where Bain is pretty much cover the whole freaking east coast?

Why does he suddenly need Emma? He actually knows where his son is and now he needs someone's help? If he'd just magicked up the cup for Belle the two of them could have been long gone and avoided all of this drama.

Also, as my friend Sam pointed out to me - if they'd said their good-byes you know, NOT HANGING OVER THE MAGIC MEMORY ERASING LINE, they also could have avoided all of this drama.

And now, because of the stupid Pro Bowl and the stupid Super Bowl (I call it stupid because my Pats are not going to be in it and I now have no desire whatsoever to watch it) we have to wait 3 whole entire weeks before we get another episode!?!?!?! Gak!