Happy Truebie Sunday everyone!!! There is just one episode left before this season's big finale.  We saw and heard a lot crazy things this season, especially last week.

I don't know about you but for me the craziest thing this season has to be the relationship between Sam, Nicole, and the Shreveport pack.  After kidnapping Nicole and her mother, Riki challenged Alcide for the packmaster position and two other scary wolf chicks backed her up.  Alcide beat Rikki up but holding on to the little piece of human gentleman that remained in him, he stopped himself short of killing her and decided to leave the pack altogether.  He then somehow freed Nicole and her mom from the crazy wolf pack clutches and took them to Sam's trailer.  After he cleaned out Terry's cubby at Merlotte's, Sam was delighted to see his new insta-girlfriend (he sure got over Luna quickly, huh) and her mother.  While the ladies rested up, Sam and Alcide shared some drinks at the bar.  Apparently Alcide's threat to kill Sam was forgotten over some shots.  Later, Nicole and her mom joined Sam for a bite at Merlotte's and Nicole's mom voiced her displeasure over there relationship as Nicole and Sam confessed their love for each other.  The fact that they've know each other less than a week apparently didn't faze them.  Fortunately or unfortunately for Sam, their discussion was broken up by Sookie who wanted to talk to Sam not about her job but about her crazy personal life.

Earlier, Sookie returned to Faery to ask for Ben's help in Bill's quest to save the vampire race.  Ben wanted little to do with it but after Sookie begged him and explained how he'd be helping not just Bill but her old friend Tara, he agreed but only under the condition that Bill wouldn't kill and him and that Sookie would agree to be his bride and become a vampire.  He also went on about how he'd loved her for 6000 years which makes no sense since Sookie is approximately 26 years old.  I really don't trust Benlow, not only is he smarmy but his romantic monologues make no sense.  Sookie told him she'd think about and returned home.  Bill however was losing patience and wasn't sympathetic at all when Sookie explained her dilemma in accepting Ben's proposal.  If it were me, I'd make promise to marry Benlow, get him to donate his blood and then let Bill finish him off once it's been synthesized.  However, Sookie apparently had more than Benlow lust on her mind or confused feelings for Bill as she then went to Merlotte's and interrupted Sam's conversation with Nicole and Nicole's mom.

Sam was just as stunned as I was when she confessed to Sam that she was reluctant to help the vampires and Benlow and thought about just letting her faery light go, effectively draining her of remaining a vampire magnet.  Sookie went on to tell Sam that she always thought they'd end up together?!!  Now - spoiler alert, book readers - in the final Sookie Stackhouse novel, Sookie and Sam do start a relationship.  However, they fell together naturally after Eric betrayed her.  I found it out of character for her to confess her so called buried feelings about him at this particular moment.  Sam basically told Sookie that it was too late as not only was he with Nicole but Nicole was pregnant?!!! SAY WHAT?!!! He's known Nicole for just a week and they're now an insta-couple with a baby on the way?  Apparently Nicole doesn't know she is with child yet, Sam's shifter sense can just smell it.  Ick, what does that smell like?  Baby powder? Diapers?  Ick!!!  Sookie left, dejected.

Meanwhile, back at Vamp Camp, poor Jason was subjected to Violet's thirst and general craziness.  Pam succeeded at getting into general population after an "oozey but productive" encounter with Dr. Finn.  Jessica and Tara urged Pam to try to talk to Violet about the Jason situation but Violet wasn't having it.  Sarah discovered that some of the vampires such as Jessica, Tara etc. weren't drinking the True Blood.  She suspected her ex had knowledge of why and tortured him into confessing that he and several of the vampires knew that the True Blood was tainted with Hep.  V.   Sarah then sent all the vampires who refused to drink the True Blood into the circular room as seen in Bill's vision where they will presumably meet the sun.  Ms. Suzuki, the True Blood, spokeswoman also showed up at Vamp Camp demanding to see Sen. Burrell.  Of course, we all know he lost his head the week before.  Sarah tried to hold her off but Ms. Suzuki infiltrated the compound and discovered that the product was being tainted.  Sarah and Ms. Suzuki fought and Sarah ultimately killed her with her high heel and the male vamps had her remains for a snack.  More Ick!!

Back at Casa Bellefleur, the family continued to mourn Terry's passing and Lafayette told Arlene about the insurance policy thus indicating to Arlene that Terry planned his death.  Arlene thought about how Adilyn and Andy's fae daugther's tormented Terry and blamed them.  Adilyn was listening in with her telepathy power and got upset and ran to her room.  The girl should be upset, her and her sisters were quite mean to Terry.  Granted, Terry's PTSD issues ran deeper than the taunts of teen girls but it still didn't help.  Holly's boys then showed up and encouraged Adilyn to sneak out with them.  She did and they hung out in the cemetery, drank and made out (how romantic).  Eric interrupted this little interlude, glamoured the boys into not remembering they were there and chased Adilyn down for her blood. Andy then found an alive but distressed Adilyn in the road, hugged her and escorted her to the safety of the squad car.  He figured she'd been through too much to lecture her but really this girl needs to be lectured about a heck of a lot.

Sookie continued her out of character craziness cursed out her parents in front of their graves, stating how she'd rather be a corpse on earth than spend eternity laying next to them.  I really hate how the show has characterized the Michelle and Corbett.  In the books, they were just nice folks who got murdered by some crazy fae relatives.  Perhaps, it will turn out to the be the same here as I don't trust Benlow at all but we'll see.  Anyway, she then told Bill she would agree to Warlow's pact and got all gussied up in her finest sexy black dress, sans pantyhose, (FYI getting dressed up and foregoing pantyhose is a HUGE pet peeve of mine.  She then met Bill and the two beamed up to fae.  However, they discovered that someone had already feasted off Benlow - Eric!  Apparently sampling Adilyn's blood was enough to get him access to Faery. 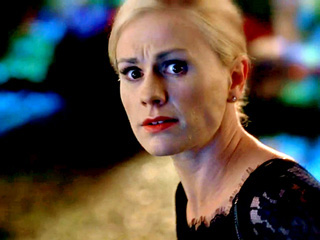 What do you guys think will happen over the next two weeks?  What would you like to see happen? Share with me!!
Posted by Jenn N. at 6:28 PM