To most people Karou is the mysterious girl with blue hair who is an art student in Prague and disappears for days. While she never talks about her past or her travels, she does share her sketchbooks filled with magical creatures and stories. What her friends don't know is that she's living a double life where the monsters in her sketchbooks are real. And she spends her time helping in Brimstone's (a chimaera who is a blend of ram, lion, and raptor) workshop, running errands around the world for him, watching humans barter for magic, or chatting with Issa (the snake-like chimaera who helped raise her). But when Karou runs into Akiva, an angel who has a strange interest in the doors that lead to the chimaera lands, she feels a strange sense of familiarity for this creature she's never met before. Akiva also finds himself drawn back to the feisty human. As their pasts unwind, both Karou and Akiva will have to decide if they can remake the world they live in or if they'll succumb to the long-standing war between angel and chimaera kind.

Without further ado, 10 Things I Loved About Daughter of Smoke and Bone: 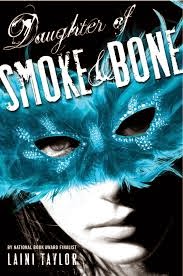