Once Upon a Time - Smash the Mirror 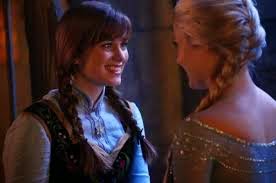 Rumple reveals his plan, finally, and tries to trap Emma and the Dairy Queen but ends up stealing Killian's heart instead. Emma flips out, hurts Henry, and decides that the only person she can trust is Rumple. Because of course. Elsa helps Emma learn to love herself, and the Charmings waffle wfith the best of them. Regina and Robin are having the best ... sleep ... they've ever had *wink wink nod nod* and Regina is conflicted. Again. But Snow convinces her that believing she can be good is all it will take. Meanwhile Robin goes hunting for answers in the library. Dairy Queen  finally gets the sisters she always wanted and immediately starts draining them of that power because that makes sense. In flashbacks DQ is sociopathically insane and gets Anna to turn against Elsa and then freezes everyone, but can only get her sisters back by travelling to the enchanted world of New York City and waiting for Emma to show up.

Coming to the forefront in this episode again is the discussion of free will vs. destiny. Can Regina ever get a happy ending or is she destined to always be painted as the villain, no matter what individual choices she makes? Was DQ always destined to be the evil Snow Queen or did she choose to be that way? And, even more to the point, Did DQ and Emma and even Elsa become monsters or not become monsters based on other people's perceptions of them?
More and more this is leaning toward free will. Ingrid was obviously not evil as a child. In fact, she and Regina have an awful lot in common. But she allowed her fear and self-hate to drive her down a path of isolation and anger, leading her here. When she tells Anna and Kristoff that she is becoming a monster because that's how they see her, the truth is she is seen as a monster because she's been acting like one, long before they looked at her that way.
Elsa has ever reason to lash out at Anna, but she chooses to believe the best. She knows that Anna would never be that cruel because she knows her sister. And even if Anna is acting that way, she chooses to love her sister no matter what. Her fear resurfaces when she is released in Storybrooke, but she realizes (through Emma's help I might add) that fear of herself is the true enemy.
And finally, Robin finding the alternate page is a huge thing. The idea that each of these characters has a multitude of potential futures is so significant. If Regina could have had her happy ending back at the tavern, then what's to say she can't have it now? And Mary Margaret reminds her that if you believe you can change things and that you are good, then "the universe" will reciprocate.

So who left the page in Robin's back pack? Does the author of the book live in Storybrooke?

As soon as Emma went to Gold and he didn't demand a price, her "wrong" antenna should have gone up. I know, I know, she's distraught and desperate, but honestly? Gold has never done something for nothing. And he even confesses this to Emma in the manor. She's so smarter than that.

There is something about that whole thing that I don't understand at all. If Rumple is trying to gain power in the hat, why go through the whole rigmarole of trapping Ingrid temporarily so he can trap Emma? I understand that he wanted to keep DQ from stopping Emma from getting sucked into the hat, but why not just suck Ingrid into the hat while he's got her trapped? How does it benefit him to have her still wandering around wreaking havoc?

And does anyone else wonder about the giant empty manor that no one seems to have known about until Rumple and Belle took their honeymoon? Why is it there? Why has no one lived in it? Why was the hat just randomly sitting there on the table? After all, if Ingrid had put it there, why wouldn't she have hid it better? And if she didn't why wasn't she looking for it? She had plenty of time to find it if it somehow got misplaced in her sojourns in Storybrooke?

Did she want Rumple to find it? Does she want him to break the curse of the dagger? Why are they just dancing around each other? I really hope there is something mroe going on between them because I don't understand the dynamic.

Side note: When Rumple asked Ingrid to look down my immediate thought was, hey, Rumple's been learning some things from the Winchesters.

Why on earth did they go through all of the trouble to get the locating potion and then not even talk about using it. I can't believe they really were going to just sit there and not even try to figure out where Emma was going. And once again Regina is the voice of reason?

But Charming is adorable.

I was a little surprised it took so long for Emma's magic to start affecting her car. Also, why is it that, in most movies or TV shows people always black out when they bounce into a ditch or have some sort of minor little car accident, but if their car flips fifteen times and rolls down an embankment, back up into oncoming traffic and then spins off a dividing wall, people are immediately blinking blood out of their eyes and frantically trying to get out of the car? 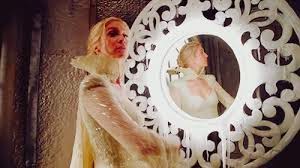 I did like the nod to the original story of the Snow Queen with the shard of glass in the eye that causes people to see things unclearly. I can't believe I didn't see that when she first described the mirror and the spell. I was probably too busy snarking. But ooh! I'm excited about that actual return to the fairy tale!

Maybe this is just me, because I am a librarian, but WHAT SYSTEM IS USED IN THAT LIBRARY? Because it isn't one I've ever seen. Why on earth would The Cat in the Hat be shelved there? If I had the capability I would be rewinding and pausing that scene, looking at every book I could see and trying to figure out what the hey is going on. This is what happens when you put a paraprofessional instead of a trained librarian in charge of a library. /rant :)

One other thought about when they finally go after Emma, they don't know where Elsa is. She could be far away? They don't know if the spell is working. So they take the one woman who has ever been able to help Emma control or use her powers properly and send her AWAY? Honestly, it's amazing these people haven't died so many times because their plans really do not make sense at times.

But anyway. I love Emma's magic aurora borealis/firework powers. But I do hope she's not completely 100% in control of them because that would be awfully quick work. She just makes up her mind? Too easy.

Going back to the flashbacks, that is how you cast an eternal winter over everything. Really, Ingrid makes Elsa look like an amateur. Also, All Kristoff did to let Ingrid out of the urn was open the lid. Why doesn't Ingrid just open the urn and let Elsa out? Because she knows it won't matter. Elsa would not forgive her for what she forced Anna to do. But she acts like Elsa is trapped forever and will never be set free.

Also I would like to start a petition that they stop showing the Snow Queen walking barefoot in the snow. WE GET IT. The cold never bothered her anyway.

And now Killian is heartless. But how does he have so much emotion if he's heartless? How does this whole heart removal thing work? Sometimes people suddenly start acting not like themselves like they can't feel. And most of the time you would never know that their heart was missing.

Rumple's plan seems very convoluted and I'm not sure how he expects Killian to help him suck up magic in the hat if he hasn't been able to do it.

But Killian's messages to Emma </3 Can bad things just stop happening to them for like 2 seconds?

One last question about the Snow Queen: Why didn't she age in the thirty-two years between arriving in NYC and being here in Storybrooke?

What questions do you have? How many do you think will actually get answered before the mid-season finale?
Posted by Rebecca T. at 10:46 PM