Once Upon a Time - The Snow Queen

Tonight we get part of the Dairy Queen's back story, though not how she ended up in America being Emma's foster mom. Emma can't control her power and magically scares her family who react just the way DQ has been saying they would. Until they don't, but Emma took off and doesn't get to see that part. Robin gets a pep talk from Will Scarlet and takes it to heart, but in a very different way than Will intended

I have to get this out of the way. The casting of Brighton Sharbino as young DQ was spot on BUT as soon as I saw her on screen all I could do was scream at the tv "DON'T LOOK AT THE FLOWERS LIZZIE. and that kind of ruined the moment for me. 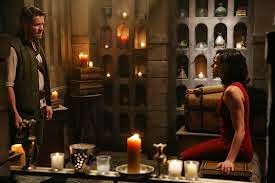 I keep waiting for the other shoe to drop with Regina. She seems ... sane. Like, she's the voice of sanity and encouraging Robin to make the right choice and denying herself. Is this really Regina?! I love it! And she tells Henry the truth about how she's feeling rather than suppressing it and she's angry, but she doesn't hide it or lie about it. But I can't help wondering what she's hiding. I mean, she's REGINA.

I don't mind the addition of Will Scarlet, but he really hasn't had any purpose. Even tonight's episode where I get why he was the one to pep talk Robin really didn't have to be him. And for those of us who didn't see Once Upon a Time in Wonderland I feel pretty lost when they talk about things that happened in the past and we're not going to get back story (I don't think) because the other show is back story? Maybe? *sigh* I just want him to have a purpose!

Anyway, as he was pep talking Robin it was pretty obvious that Robin was not going to be running back to the lovely and whiny Marian. Nope. It was clear that Regina was the one he had to be with. I'm not sure what I think about this development. Because I want Regina to have a happy ending and if Robin does that then yay! But Robin is married. With a son. But COMPLICATED.

I was cracking up at Emma's epic magic casting stance because I didn't think you could make that pose while holding a candle, but apparently you can. Huh. And when she gets really mad at DQ in the sheriff's office her mouth kind of went all werewolf-y. And, I'm sorry, but when she drives away in her car it sounds kind of like a wind up toy. Okay. Done with my mild mocking.

I'm finding the whole "they're scared of Emma's magic" just a little bit annoying. After hasseling and pushing her to use her magic and then freak out like that? Okay, granted, she blew a hole in the building and made a street lamp fall, but Snow's scolding tone and refusal to let go of baby Neal just felt forced to me. I know it's a show that is written, but I don't like the feeling of the story intentionally being manipulated like this has felt.

Does anyone else wonder why DQ isn't as obsessed with Regina as she is with Elsa and Emma? Is it because Regina is/was the villain? She has magic and people are afraid of it, right? Maybe she's not interesting because she knows how to use and control her magic so she won't be so easily manipulated.

And, speaking of Regina, she's someone who is (basically) family for Emma who understands how Emma feels!

And while the initial reaction to Emma's magic explosion was a little harsh, what she's forgetting and what the DQ doesn't realize is that the immediate follow up reaction was going to be, and was a concern for Emma and a sense of regret for their reaction. They do love Emma for who she is. And if Emma were ever to accidentally kill someone the way DQ did, she would have a harder time forgiving herself than her family would have forgiving her.

As for the flashbacks, the casting of the Duke of Weseltown was perfect. 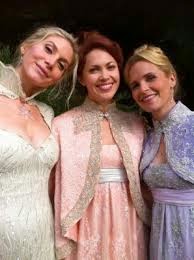 Was anyone else distracted by Gerda's hair? Elsa and Anna's mother clearly had brown hair. Brown. Not violent red. And then when she braids it it suddenly looks a completely different color. Though I do have to say she looks remarkably like Anna when she's like that.

I would also like to know how they managed to keep those yellow ribbons so pristine for so many years. Not a stain or unraveling end in the set. Pretty amazing.

And it's good to know that Elsa's power were basically the price Gerda had to pay for erasing everyone's memory. Then she doesn't even take responsibility - just locks her daughter up and makes her wear the magic gloves (!). Though it does explain why she was so freaked out and wanted to keep the sisters separated. Good job.

And I really hope there is more to DQ's plan than what we've seen so far. I just feel like a giant piece is missing from the puzzle. Like her deal with Rumple. What was that all about? What else is going on here. I'm really hoping it is something and not just intrigue for the sake of intrigue.