Once Upon a Time - Fall

This was a doozy of an episode. It doesn't quite make up for the ones that didn't go anywhere for so long, but this is the kind of episode that reminds me why I'm still watching this show.

Tonight the Snow Queen's (yes, I'm giving Dairy Queen a rest :P) curse is closing in on the town in a giant glittery cloud. Elsa finds Anna's necklace and uses it to try to track down her sister, Belle and the fairies struggle to find a counter to the curse, Rumple plots and blackmails Killian, and everyone is scrambling to figure out how to survive. Meanwhile Anna and Kristoff face off against Hans and his brothers, strike a bargain with Blackbeard, and get locked in a trunk on the bottom of the sea. Just another day in Storeybrook.

Even though I'm annoyed at Rumple I do find it sweet that he is so attached to Henry - to his grandson. I just get so frustrated with him choosing repeatedly to be selfish and cruel. He decides he is the villain and conveniently forgets the many times he has been selfless. Granted, many of those coincided with something he wanted, but there have been times he's simply done the right thing. But when it comes to power, he still can't break it's hold on his heart. 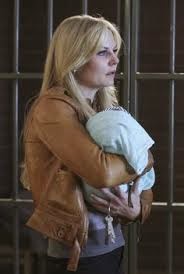 On other fronts, however, this episode held some significant breakthroughs. Emma's vulnerability with her parents and with Killian really show how much emotional change she has gone through in this season particularly. Even though she is still unsure of her powers there is a different sense to it. A new confidence. She's scared of losing the people who believe in her but not because they will turn against her (of their own accord) but because she loves them and isn't sure that her magic will be strong enough. Yet she doesn't argue when they affirm their belief in her and their belief in her shores up Elsa's confidence as well. Seeing that there are families who support a daughter with magic restores her faith. That on top of finding Anna has strengthened Elsa's belief in herself and in those around her. I also love the way Emma calls David and Snow Dad and Mom so easily. I've said it before, but I love the way the actors pull off that relationship. In addition, the way Emma concedes so quickly and positively to letting Regina protect Henry is huge. Even last season she would have turned it into a bitter argument. But she believes in Regina in a different way now. She trusts her to a greater extent than I think any of them would have guessed. 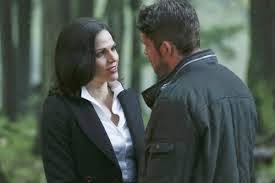 Regina continues to be my favorite character and tonight she really demonstrated how much she has changed. Simply the fact that she is willing to put her faith in Emma and Elsa and, to me very importantly, the fact that she knows she must lock herself up because she could be the most dangerous of all is huge. That she can admit that about herself? Really big. It makes me sad that she thinks that only Robin and Henry look at her with any amount of trust.

And speaking of Regina, she wins all the prizes for expressions and dialogue tonight. Her face when Snow sassed her about things being up to code was hilarious and a moment later when Snow agreed with her. Her face wins the episode.

I also thought her line "You're more than heroes; you're leaders" was so spot on. And that is the transition that Emma and even David and Snow are going through. With all the craziness they're in perpetual "hero mode" and because of that they've risen to positions of power - sheriffs and mayor - and they can't just be heroes anymore. They have to make those hard decisions to protect everyone, not just the people right in front of them. And sometimes at a small cost in order to make a larger victory. Snow and David never had a chance to rule their kingdom and now they have to figure it out quickly. 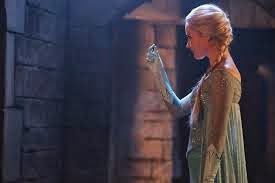 Other top Regina lines:
"I should know better than to trust blondes by now." when Elsa steals the necklace.

And her dialogue with Snow:
Regina: "Time for a hope speech. Virtues of blind faith?"
Snow: "Well it seems Elsa's blind faith is exactly what's screwing us right now."
Regina: "Coming from you that's just terrifying."
Her delivery of these lines was absolute perfection.

Although I don't want Killian to die, I would rather he sacrificed himself trying to save everyone than just kept letting Gold blackmail him. His haunted puppy dog face is driving me crazy. Every time he came on screen I just wanted to scream BE A MAN AND SAY NO. Which brings his and Gold's stories full circle. They both choose themselves and choose the people they love depending on the situation. Neither is fully villain nor fully hero. Which is probably one of the things that makes them so darn interesting as characters (*cough*Regina*cough*) and probably why the "villains" (not the "big bads") are the most fun and compelling to watch - there's something more intriguing about a villain who is sometimes heroic than a hero who is sometimes villainous. 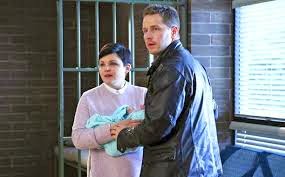 I would just like to say that those last moments between Snow and David? Brilliantly acted.

I have really grown much more happy with Kristoff and Anna. I loved how much he just trusted Anna would understand and take part in his plan to evade Hans. And when Hans says they rolled around in the treasury Anna's response: "You rolled around in gold bars? Weird. And ouch" was funny.

More questions:
1. Why did the Snow Queen randomly decide to unfreeze Arendelle at this point?
2. How on earth did the Snow Queen keep the curse up while she was foster mothering it up in the states?
3. How did Blackbeard end up with the Jolly Roger? I'm assuming this happened when Killian sold the ship in order to get to Emma, but we didn't find out all of that, right? (am I forgetting something?)
4. So will we ever get the story of how Killian got to New York?
5. What is in that bottle on the beach? It showed up twice in this episode so it must be SUPER IMPORTANT. It got its own zoom in freeze shot and everything. Could it be connected to the bottle Elsa's mother threw overboard?
6. Can things come back out of the hat? Or are they trapped in there forever?
7. Will Killian ever get his heart back?
8. Can we survive the winter hiatus?
Posted by Rebecca T. at 10:00 PM