Once Upon a Time - Family Business

Tonight everyone has to decide whether to tell someone the truth. And almost no one does. Also, Belle and Elsa go to the building with the greatest weapons in the world - the library - and Elsa discovers the truth about the Dairy Queen. Belle proves herself to be much more wily and conniving than anyone gave her credit for and in the flashbacks Anna and Belle go on a fruitless mission that leaves Belle without her memories and Anna trapped in the Dairy Queen's clutches.

Even though not much really happened, things did start to pick up a little bit in this week's episode. And Belle finally gets another episode! Yay! We also continue with the theme of doing anything for family seen through Belle's journey and through Rumple's conversation with DQ as well as DQ's bizarre attempt to put a "family" together at any cost.

Hook's comment to Emma that "Wounds that were made when we were young tend to linger" is a long standing theme in the show as well. So many of the events that have happened to children have gone on to haunt them and their loved ones.

When Robin kept coming after Regina, I felt like saying Dude. Just let it go already. Hounding her like that isn't going to help either of you and man, do I feel bad for Regina. I know she's still trying to figure out how to change the book and get her happy ending, but for her to even say to Robin that he has to forget her and to spend any time at all looking for a cure - total change from her normal operating procedure.

As Kristoff's hair grows out I like him better, but he still kind of feels like a placeholder most of the time with no real purpose.

Why on earth is Anna carrying the hat around with her all over Arendelle instead of locking it up somewhere safe? And how did the magic hat end up in an abandoned house in Storebrooke that was conveniently available for Belle and Rumple's honeymoon? I'm really hoping that Rumple finding the hat was part of DQ's master plan (and that the master plan is more interesting than the one we learned about today) and didn't just get found out of random happenstance.

And how lame was it that she tells Belle that she "prays you never cross paths with this twisted man." Okay, so I guess without this, Belle and Rumple would possibly have never met, but this line was met with my eye-rolling :) 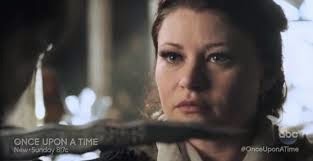 As for Belle, I'm ashamed for her. Lying? Manipulating? Using the dagger? And I'm still on the fence as to whether that dagger is real or not. I'm actually kind of leaning toward it is. But I don't know.
And I loved that Belle's scarf had tiny little daggers all over it - not only alluding to the actual Rumple dagger, but also to the fact that she feels as though she stabbed Anna in the back and therefore also hurt Elsa.

However, I will say that the mirror scene was intriguing and well acted by both Belles :)

Also, is it just me or did that trip to and from Arendelle take considerably less time than we've been led to believe it will? And why did Belle's father think that  screaming at his daughter to leave it alone and stay locked in her room was somehow better than telling her that Belle's mother sacrificed herself for her daughter? 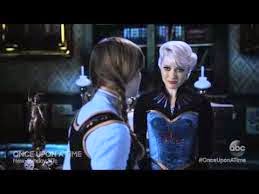 I'm curious about DQ's other sister (the one that looks mysteriously like Emma) and just really really really hoping that she doesn't turn out to be Snow's mother or something ridiculous. Though Hook's quip to Elsa saying, "Spend a little more time in this town, love and you realize just about everyone is related" doesn't bode well for my hopes that the family trees not become even more convoluted than they already are.

And couldn't they have read the whole prophecy for us? Do we have to be kept in the dark except for a couple of random phrases taken out of context of the whole? Is my English major-ness showing through? 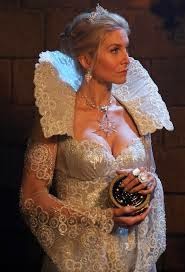 And, unless there is something that hasn't come out yet (please, please, please) I'm not entirely sure why DQ would think that destroying Emma's family and friends would make her suddenly agreeable to being part of her new magic family.

And, there's another factor here that I don't know if DQ has taken into consideration - Regina. She has powerful magic and powerful dark magic at that. It hasn't seemed to be as powerful as DQ's from what we've seen in their very brief face-offs, but I have a feeling that she's going to be the weakness in DQ's plan.

And yay for snarkiness! Regina won best line tonight when she told Emma, "It's bad enough I'm stuck here with you and Captain Guyliner making eyes at each other." I'm seriously still laughing over that one.

So what did you think? Where do you think this is all going?
Posted by Rebecca T. at 9:48 PM