I don't do Halloween. Not really. We never did trick-or-treating as kids in my family (never really felt like I missed anything). I enjoy dressing up, and for the first time I'm in my own place where I had to think about getting candy for trick-or-treaters coming to my door!

I also don't really do horror movies. I was one of those people who had nightmares after watching something most people would consider innocuous. So I didn't see my first real thriller/horror movie until I was in my 20's. True story.

But I've been slowly working my way into them. I still prefer thrillers to horror movies and I'm not a big fan of really gory movies. But the short series Harper's Island hooked me on a good psychological horror and when I heard that Joss Whedon was putting out a horror movie, I knew I had to go see it in the theatres, so I dragged Jenn N. along with me. And I loved it. I love the way that Whedon both paid homage to horror movie tropes and yet also made fun of them. It's a fascinating movie to me. And since Friday is Halloween, I thought that it would be fun to do a 10 Things post about one of the only horror movies I've seen :) 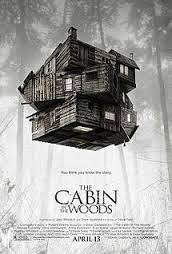 So there you have it! Happy viewing!
Posted by Rebecca T. at 8:00 AM