Fairy Interesting: Once Upon a Time - Rocky Road

Here it is! My recap of episode 3.

This week in Storeybrooke secrets and mysteries abound. Marian falls under an icy curse and Robin can't break it because of his secret. Emma is pushing Hook away (again) because of a secret fear. Rumple is lying once again (big surprise). Snow can't bear to put the baby down for even a second and is wearing herself out in the process. Elsa can't remember anything but is reunited briefly with her aunt (!?!). Will Scarlet aka the Knave of Hearts shows up just long enough to turn Emma in the right direction before disappearing. And for once, the only one who's being honest is...Regina? In flashbacks to Arendelle Elsa and Kristoff are slowly getting to know each other as they fend off an attack from Hans and his brothers. And we're left with a whole lot of unanswered questions. 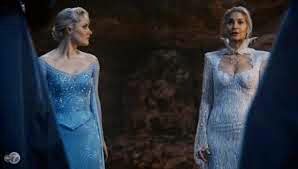 So the dairy queen (Emma's line was one of my favorites this episode!) is Elsa's aunt. I'm just glad she wasn't a long lost sister who was bitter because her parents sent her away but then kept Elsa. But even with that reveal there are still so many questions surrounding Elsa and Anna (who I'm really upset we haven't seen more of) and Kristoff (and even Hans) that I'm not sure they're going to be able to juggle everything. 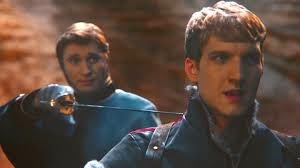 Speaking of Hans, I'm still not sold on the casting for Kristoff, though he's growing on me, but holy cow was Hans spot. on. I can't even believe how perfectly he was cast. And I'm glad he didn't just disappear. It makes total sense that he would come with his brothers to wreak some sort of revenge on Arendelle.

When Elsa picked up the urn and was trying to read it, I started banging my head because when will people learn you should never read strange writing on an obviously magical item. Fortunately Kristoff is not so stupid and he has the right idea when he "translates" it as "Dangerous urn Stay away!"


It really is his quippy-ness that is beginning to sell me on Kristoff. I loved that he had to correct Hans by noting that "technically she wouldn't be a widowed. W're not married yet, so- ow." And his ow was perfectly and hilariously underplayed.

As soon as they said "true love's kiss" I knew it wasn't going to work. Robin is noble and doing the right thing, but it's clear that he loves Regina and that this whole situation is painful for him. I was kind of hoping that the freezing spell would be a way to get rid of Marian, but that would be too quick and easy. Plus, how much more does it say about Regina that she's willing to risk everything she cares about to help the man she loves by saving his wife. 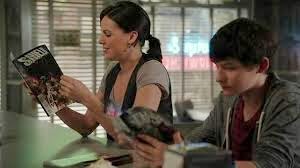 And the fact that she told Henry her plan (well, pretty much) about finding whoever wrote the book?! You could have knocked me over with a feather. I was totally waiting for her to lie. And I find it so interesting that she's the only one in this episode who didn't lie or connive when the entire episode was about people lying, going behind people's backs, and tricking people. What a great way to subtly show how much Regina has changed.

Side note: Regina was rocking the casual look this week. Loved it. 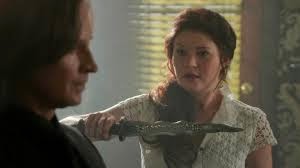 Speaking of changing (or rather NOT changing) oh Rumple.

I can't believe he switched out the dagger. Again! And lied to Belle. And whatever happened to the magic hat? And how does he know the dairy queen?
You know, it's funny. When Regina was being "good" and then "bad" and waffled between the two it drove me up the wall. But with Rumple somehow he pulls off the person who almost reforms and then just doesn't - can't - won't change. And I like him as a character anyway. 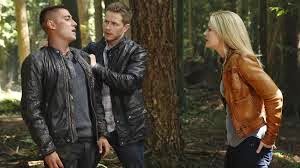 And I found the whole Will Scarlet thing to be a bit confusing. First off because it was such a brief interlude. I'm assuming he'll be coming back at some point. I also felt confused because I only saw the first 2 or 3 episodes of Once Upon a Time in Wonderland (and it's still not on Netflix) so I didn't know the Knave was also Will. So I feel like I'm missing a lot. I'm assuming they're going to build it as though people haven't seen OUaTiW but it felt off to me, probably because I saw just enough of the other to recognize him. More answers here please. Though I do have to say that for a bit I thought he was working with the dairy queen and was going to lock Emma and David inside. Though I have to say I loved his line about two sheriffs not being fair.

Other than Emma's "dairy queen" line (which I'm still chuckling over), one of my favorite lines of the episode goes to Elsa when she asks Kristoff: "Why is it your compliments are so aggravating?"

Emma's remark, "I can't save a cat from a tree right now. It's like I'm the anti-savior" is in the running, too. 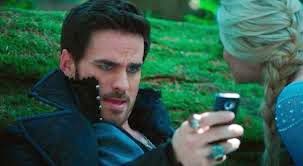 But first prize for funniest line comes from Hook (who else) with his rant about the cell phone: "It's a device for talking. I don't know. I press the Emma button and she answers usually... Why should I carry around this ridiculous thing if you're never there when I use it?"
I feel like the writers have been watching Sleepy Hollow!

Least favorite lines of the episode go once again to Grammy and Leroy. I hate the new writing for them. Leroy used to have the best lines. I loved him as a character. This season every time he opens his mouth I just want to slap him. He's caustic and abrasive in a way he wasn't before and I hope they cut it out.

Speaking of Granny and Leroy - there's another loose end. Last we saw them they were setting off in a mob to find and attack Elsa and then we never hear of it again. I just felt like there were so many loose threads this episode. In a not controlled way.

I'm still dying to figure out how the dairy queen got to Storeybrooke, how Elsa ended up in the urn - if Anna did it, there was a good reason. There is no way that she turned on Elsa. No. Way.

And... the rock trolls took Elsa's memories? But before she ended up in the urn? I'm really confused as to the timeline here. But I do like having new flashbacks to unravel the Arendelle story because we were really really really running out of material to mine in the Enchanted Forest.

And of course how can I end without a few words on Hook and Emma.

Elsa really gives Hook something to think about when she tells him, "I think your self-appreciation is blinding you to a simple fact: It's not about you. It's about her."
I mean, he knows Emma is going through things and is pushing him away, but I think he really did feel at times that it was because of him. When it really isn't. It's about her acceptance of who she is and her fear.

Well, this episode she didn't think - she just used her magic and saved people's lives. When she just reacts she's much stronger and more controlled. But even having saved Hook and David and stopped dairy queen temporarily, she still can't believe that she's actually strong enough to be the savior.

And of course she's afraid of losing Hook. "Because everyone I've ever been with is dead. Neal. Graham. Even Walsh. I lost everyone. I can't lose you too." She also lost her parents when she was young, lost Henry for much of his childhood, lost Neal before losing him again - she hasn't had the best luck in keeping friends or family. It's slowly coming together now, but it's still something she's facing. And her final admittance of this to Hook is a real breakthrough.

Side note: I love how adept Killian is with that hook. It can't be easy as an actor to become used to something like that and make it a part of you, but he does. I loved the way he just hooked Emma's arm to stop her - never afraid of hurting her. And she's never afraid of him hurting her. she doesn't flinch or move her arm away or act in any way like she's concerned or wary of the hook.

So a couple of tiny answers and a whole lot of new questions and mysteries. There are a lot of loose threads this season and I'm hoping the writers will be able to pull everything together and not lose sight of something important. *crosses fingers*
Posted by Rebecca T. at 8:00 AM