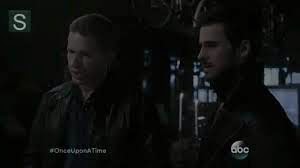 Tonight in Storebrooke Elsa goes a little ice crazy, yet manages to bond with Emma over the trials of having magic you can't control. Snow learns a little bit about generators, Henry packs Regina a get-over-your-break-up basket, and Hook and Charming find the one thing that could make them see eye to eye: Emma's imminent death. Meanwhile back in the "long ago" past (which they randomly decided they needed to tell us) Anna teaches David how to sword fight and Bo Peep is revealed as a callous overlord.

There are a few things I found confusing in this episode.

First, how did David and Kristoff know each other? I mean, I know we don't know a lot about Kristoff's past, but how on earth would he have gotten to the Enchanted Forest and back?

Second, if this happened so very long ago, then that means that it's been years and years and years since Anna left. So why is it only now that Elsa came looking? I know that time is a little wonky, but really. That's a big time gap for Elsa to have waited and now be so very frantic. I'm not getting that.

So Henry was super cute in this episode with the whole basket and then banging on Regina's door. But it was painfully obvious that he has continued to grow while the character is still supposed to be fairly young. I really don't understand why they didn't use the abduction to Never Land or the trauma there to create some sort of "magical accident" where Henry was aged forward several years. Come on. This is a show where you could have pulled that off and they lost the perfect opportunity.

I loved Emma's explanation of Regina's reaction: "She's really upset over Robin Hood and all of the things that have happened over the past... well, forever."

Anna continues to be adorable, but I just found myself excruciatingly confused by the David/Kristoff connection and how David knew so much already and it really distracted me during the whole flashback scenes.

However, I adored evil Bo Peep. I think that's one of my favorite villain twists and I liked the way the actress played it and I was cracking up that she is now the town butcher. HA.

(I really wanted to insert a picture of Bo Peep here, but the internet has let me down. Problem of writing a post right away=lack of some pictures)

3 more annoying things to me
1: David's daddy drama. Because there isn't enough parent/child dysfunction on this show.
2: How easy it was in the end to get Emma out. I mean I get it, but I also felt like it was just too easy. And seriously, Emma should have been at risk of losing at least some fingers and toes and she got up way too easily for someone who was literally turning blue from the cold.
3: How obnoxious Leroy and Granny and whichever other dwarf that was. I mean Leroy and Granny are often brusque and occasionally border on rude, but they were out of control in their pounding on Snow. That whole thing felt completely out of character for both of them and completely contrived in order to provoke Snow's outburst. 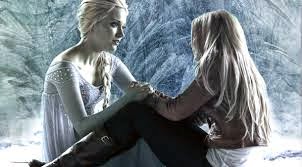 But we could have gotten there (and it would have been even funnier imo) if Granny and Leroy had just been their normal selves.

Going back to Elsa, I kind of understand her wanting to keep everyone in the town. And I understand that she struggles to undo things, especially now that her faith in herself has been shaken by her mother's diary (time thing still bothering me, though). But I have to admit that when she says they need to find Anna or she'll freeze the whole town and everyone in it, my immediate thought was...

But when Emma was complaining about the cold did Elsa really have to say
"It's never bothered me"???
Ridiculous :)

So when Emma was trapped in the ice did no one think, hey we should get the seven dwarfs with their PICKAXES to come take a whack at this while we try to find Anna?

And last but not least I think that Killian was the most adorable he's ever been. Champagne and counting dates and the "world's largest ice bucket" and his ridiculously adorable worried face. I'm pretty sure he was tearing up while Charming was trying to convince Elsa she could save Emma. Augh. He has really grown as a character. And he had the perfect line of the night too.

"I wouldn't risk my life for someone I see as loot. Whatever we become it's up to her as much as it's up to me."

I was a diehard Neal/Emma fan, I really was. And I was SO ANGRY when they killed him off. But I gotta say that Killian is making it REALLY hard for me to stay angry or even remember that I ever shipped Neal/Emma because the Hook/Emma thing is really working.

So next week we have the Ice Queen. YAY! And, even though I'm not a huge Elizabeth Mitchell fan, I like the way she's playing this role (in the whole what 20 seconds we got to see her?). Excited to see where all of this goes.

So what do you think? Did you buy that Anna could teach David sword fighting in one day?
Posted by Rebecca T. at 9:56 PM