Once Upon a Time - Breaking Glass 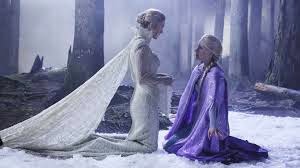 So tonight... I don't even know. Dairy Queen manages to lure Elsa away with an outrageously transparent deception and then doesn't even get upset when she escapes... Emma tries to make up with Regina. Hook bonds with Henry (which might have been the best part of the episode...if we'd actually gotten to see it). Snow and David go for a walk, Snow catches Will of Hearts and then lets him go. Sidney escapes from Regina's clutches. And Emma remembers something from her past as we mainly get more questions and no real answers.

My sister and I were talking about this season of Once and she said, "It's gotten so ridiculous, but it's like a train crash: I can't look away."

I was really hoping that this episode would be ... well, something. I don't understand how they have now managed to fill 2 whole episodes with fluff. There has been no real content. But I have no plans to stop watching because surely something has to happen next week. And that last little tag with a tiny itty bitty reveal of something (not an answer, but you know, something) about the Dairy Queen's past has me so confused I have to hope that they have some sort of plan to pull all of these bizarre threads together.

I also just realized that they never returned to the mob that was forming to hunt down Elsa. Are Granny and Leroy still wandering the streets waving torches and pitchforks? Or did they all just slowly drift away and go back home?

And with all of the interesting stuff with Regina lately, her dialogue was so wooden tonight. Ugh. 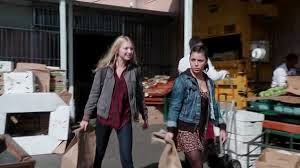 Okay, well let me start with the end. Even though I felt like Emma's whole flashback didn't reveal anything about her we didn't know, it was obviously set up so she would get out the camera and discover the bizarre connection to the Dairy Queen. (though I do have one question about that - the camera had to have been stolen from Lili's family and you can hear DQ say "put that down; it's evidence" so how on earth did Emma end up with in in her treasure box?)

DQ met Elsa and then ended up in the US where she became Emma's foster mother and then she went to Storeybrooke to (and here's the part that just knocks me out) have "a family that loves her." Because we haven't heard that before like last season with the Wicked Witch or with any of our other family-challenged characters *sigh*

ANYHOO I really wanted to see more with Will of Hearts (and btw, I thought that the exchange between him and Snow was the most interesting either of them has been all season). I liked him in the few episodes of OUaTiW I saw, but he seems pointless and undefined here.

Did anyone else find it odd that David somehow managed to disappear in the 2 seconds it took Snow to turn around and notice the very loud and obvious man digging in the middle of the field?

I was going to ask how the Knave of Hearts could possibly also be Will Scarlet, one of the merry men, but then I remembered that this is a show where Rumplestiltskin is also the crocodile and I swallow my question. 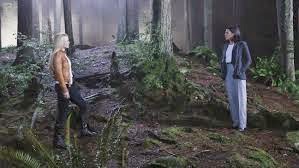 A couple of wardrobe notes: While I really like the recreation of Elsa's dress, that cloak looked like a bad Halloween knock off.

And, I don't know why, but I really thought Regina was rocking the 90's Monica Geller look. The high-waisted jeans, the over-sized blazer over the white t-shirt. Oh yeah.

I'm not entirely sure of the point of luring Elsa into the woods that way, just to lock her up, leave her alone, and then laugh when she shows up. Is DQ trying to help Elsa gain control so they can be best buddies? Locking her up and pretending to kill her sister might not be the best way to go about that... 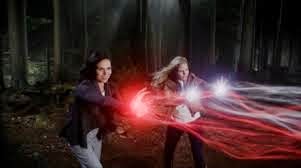 I'm still cracking up over Emma's epic magic casting stance and the way she ran over to the tree to blast the monster the first time and then ran right back to Regina. HA. HAHA. 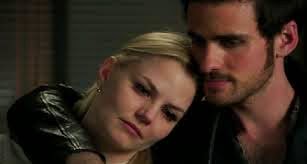 I did love that Hook felt comfortable enough to ask if he could see Emma's box of memories.
And that Emma actually let him.
Big stride forward for her. Big.

And I appreciated the snapshot of Emma and Neal - a reminder that, yes, he had a big part in her life and will always be a part of her past. 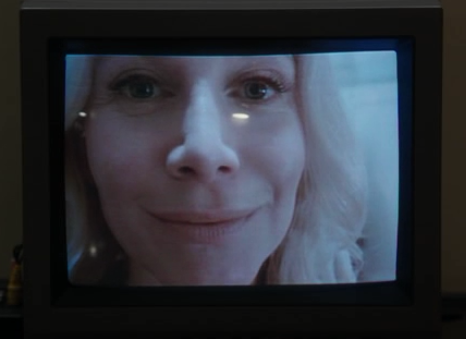 And finally,
That freeze frame of the Dairy Queen was hysterically awful. I have to wonder if that happened by accident and it was so hilarious they just decided to leave it. I mean it doesn't even really look like her! HAHAHA!

So what did you think about tonight's episode? Am I being too harsh? Please! Give me more to like!
Posted by Rebecca T. at 10:00 PM