If you've been around here a while, you've noticed that I do these "10 Things I Loved" post about books I want to review. I love the list format as it really helps me focus my thoughts and write a cohesive review. But every once in a while I'll read a book that I enjoyed, but only to an extent. And I honestly can't find 10 things I love about it, but I still want to talk about it.

So I'm adding another list type post - 3 things I loved and 2 things I didn't (as I'm sure you gathered from the title of this post). I won't be doing this every time - in fact, I try to stick with books that I really like. But I was an English major and I do think critically about the things I read, so every once in a while I want to look at what made a book just not quite fully work for me. 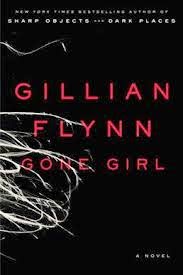 And my first book is, of course, the wildly popular and soon-to-be-movie-adapted novel by Gillian Flynn: Gone Girl.

Basic premise: Nick and Amy have been married five years. On their fifth anniversary Amy goes missing and suddenly Nick finds himself in the middle of an investigation where more and more clues start pointing to him as a suspect.

The novel goes back and forth between Nick and Amy's narration, jumping around in time to some extent.

And that's all you're going to get here, because this is one of those novels where significant plot points will be revealed if you describe it too much. Down below, under the giant spoiler warning I will discuss a couple of points in more detail.

So here are the three things I loved about the book:


Because, now come the 2 things I was not a fan of:
So should you read it? Well a lot of people disagree with me. I'm really curious to see how they make this book work in a film. So if you're intrigued, I say go for it. Most of it was really fascinating. Just know that you may not like the ending. Or you might.

If you read the book (or don't care about spoilers) you can scroll down to see a few more of my specific thoughts.

Also maybe in the comments

Okay, so don't say that I didn't warn you.

I have read other books with sociopathic characters that I have really enjoyed. So I know that it wasn't just that aspect. However, in the other ones I can think of there has been some sort of something that has connected me to that character and made me root for them. There has been either some sort of redeeming quality (even if extremely tiny) or some sort of aspect that almost forces me to be on that character's side, even while I'm wondering why on earth I could ever want this character to get anything.
That was completely lacking in Gone Girl. I hated Amy. I didn't even really like diary Amy in the first section. But as the story progressed I disliked her more and more. I never, not once, felt any kind of connection to her. I hated the character absolutely. I wasn't a big fan of Nick, but I could see some glimmers of his character that at least made me understand some of his choices. Amy was absolutely and completely unlikable to me. So for her to get absolutely no ramifications for her actions was beyond frustrating.
I think that the ending was crafted very intentionally. I'm in no way saying that Flynn is a bad author because of this. I intellectually understand her decision. I'm just not happy with it. And I have to believe that she knew how some readers would react. So I have to give her chops for going with her desired ending, not one that would make people happy. But I do have to say that I'm pretty sure I won't pick up any more of her books.
But I am talking about this one. And I guess getting people talking about your book is a good thing too.

So what did you think? Did you like the ending? Loathe the ending? Did you fall in the camp (of which I haven't seen yet) of people who didn't really care one way or the other? I would love to hear.
Posted by Rebecca T. at 8:00 AM

The ending drove me crazy too but I think that was precisely what Gillian Flynn intended to do. I couldn't find a single redeeming quality in Amy. As you probably know, my favorite endearing sociopath is Arianna Osgood. The part that my dad and I have a hard time accepting is that Amy seemed so brilliant, her plan so crafted and yet she trusted those drifters?! The drifters that ultimately ruined her whole "perfect" plan. She seemed way to smart for that. We're really looking to see how the movie is done. The trailer certainly looks good.