Once Upon a Time - The Apprentice 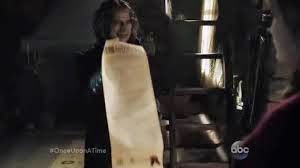 So tonight  nothing happened. Gold is the same, Hook is the same, Emma doesn't find anything out about the dairy queen. Elsa doesn't do anything but make strange comments about Emma's dress (which isn't really much less fabric then her own...?). Henry and Regina don't make many headway. The Knave of Hearts doesn't do much of anything. Anna doesn't do anything and goes back home. And Snow and Charming are parents sending their daughter off to prom.

There are so many threads going on in this season that none of them are being handled particularly well. I like the idea of many of these story lines - I really do. But tonight's episode was so scattered with so many different storylines being followed that I was just really annoyed. Last week was scattered too, but at least something HAPPENED. There was action, intrigue, snappy one-liners. All things I found sadly lacking tonight :( 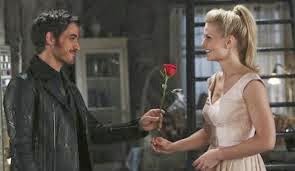 Even Emma and Killian's date, which had the potential to be super adorable and I was getting ready to be charmed with the brief bit of flirty flirty when she asked him out, was pretty dull and uneventful.

I did love how horribly Killian overshot when Emma asked him out. And I don't know if I buy the fact that there was nothing wrong with the hand. After all, as Rumple said, the Dark One lies. Who says he isn't still lying now? And another thing. The moments Killian "flips out" with his hand are still guided by a moral code. The first was in protecting Emma and the second was in trying to stop the knave from breaking in. Not just random acts of violence for no reason.

I did enjoy the little Lady and the Tramp moment at the restaurant. 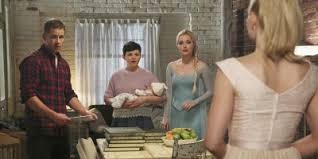 As well as Emma's snarky, "What should I call you? Captain Hand?"

Honestly the highlight of the episode for me was David and Snow - especially David - reacting to Emma's date. That was hilarious and adorable. 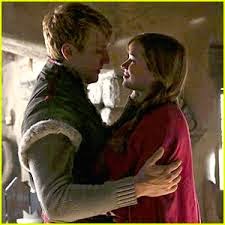 I'm most confused about Anna. The whole grand adventure seems to have been utterly pointless to the plot (except for the forced encounter with David and this weird encounter with Rumple) and now she's back home with nothing much to show for it. But at least she and Kristoff are reunited. Even if his hair is ALL WRONG.

I also swear that if they use the word "monster" one more time I'm going to have to start a drinking game. And I don't drink.

Hehe. Henry going undercover at Gold's shop - this should be interesting. And I appreciated the music. But someone seriously needs to teach Henry how to sweep.

So not too many thoughts. I'm hoping the next episode has some more meat to it. And maybe gets some better focus.

What did you think? Did you like it? I'd love to hear your reaction!
Posted by Rebecca T. at 9:17 PM

Loved David and Snow's parental action with Emma...and the Polaroid camera! To me it was a reminder that we're still in a town where no one really can leave so while some things may remain modern...others don't.

I didn't really watch a lot of OUAT: Wonderland, so I'm not sure if that's how the Knave acted in that show...but I feel like he doesn't have much of a point on the show...which is too bad because I was looking forward to him on OUAT. But maybe because so much is going on there's no room to give him more to do or for those fans of the show who didn't carry over to Wonderland to learn more about him.

I yelled "Where's Ruby???" at the TV when they showed Granny's. I miss seeing Meghan Ory on TV.

Loved that Henry was supportive of both his mothers in this episode, wanting Emma to be happy so she asked Killian on a date and helping out Regina with Operation Mongoose by going to work for Gold. I'm a bit worried about Henry just because Gold may figure out what he's up to and that could be a dangerous thing.

And I'm just not into Anna's storyline at all. I am so sorry!! (Frowny face!) Maybe it's because I haven't actually seen Frozen, but I just find myself tuning out when she's on the screen. I feel bad. I'm sure there's a point to everything she's doing. I just haven't found it yet. I have enjoyed Elsa though...love how she's bonding with the entire Charming family.

I like the casting of Anna (having seen the movie) but that whole storyline is feeling less and less relevant to anything going on in Storeybrooke. I hope they connect it in some way more concretely soon.