I've decided to move this post to the first Wednesday of the month rather than the last, so you aren't missing anything - there is no January edition :) I've been in massive reading mode, and here are the books I'm working through now:

On my Nook:
I just started As Red As Blood by Salla Simukka. I was a little confused at the very beginning, but I'm really starting to get into it now. When I saw it was a Snow White retelling I had certain expectations, but this is not your typical fairy tale retelling. Once I realized that and put my expectations aside I found I was able to enjoy it more. I'm really looking forward to seeing where this mystery goes and am really enjoying the protagonist, Lumikki, as well as the setting.

On my Phone:
The Academy: Thief by C.L. Stone. I haven't read enough of this to have an opinion yet to be quite honest, since I've only read about half a page. Haven't had a lot of opportunities for phone reading recently.

In Print - Fiction:
Black Widow: Forever Red by Margaret Stohl. I fortunately caught a review that warned this was not a tale of Natasha's teen years, which let me go into the book with the proper expectations. I am really enjoying this. I was a little nervous, because I wasn't a fan of Beautiful Creatures, so I was relieved to love this story. Natasha "Black Widow" is a part of the story and each of the well-known Marvel characters encountered read like the characters should. I have a bad feeling about where the ending is going though, but in a good way.

In Print - Non-Fiction:
Alexander Hamilton by Ron Chernow. Picked this up after becoming obsessed with the Hamilton soundtrack and it's so fascinating. It is, however, over 700 pages long. A marathon reading session while waiting for my car to be worked on has gotten me almost 300 pages in, but I have a feeling I'll be working on this one for a while. 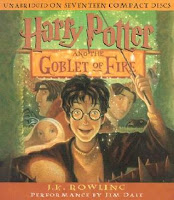 On Audio in my Car:
Decided to follow up my re-read of A Series of Unfortunate Events with a re-read of the Harry Potter series. I'm on Harry Potter and the Goblet of Fire, which was my favorite book of the series. I'm curious to see if that changes on the re-read since I found myself loving Prisoner of Azkaban much more than the last time I read it.

On TV:
I finally wrapped up my X-Files binge just in time for the new series to start. Now I'm going through Star Trek: Next Generation, which I'm loving a lot more than I anticipated, and, when I need something pretty much brainless, I'm rewatching the early seasons of Pretty Little Liars.

How about you? Any books (or TV shows) have you staying up late? Anything I should add to my To Read list?
Posted by Rebecca T. at 8:00 AM