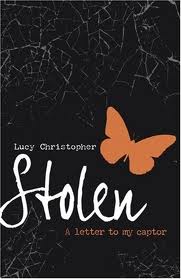 It was just a cup of coffee. A bit of kindness from an attractive young man at the airport cafe counter. Gemma never thought that she would wake up in the middle of the Australian desert, thousands of miles from her parents, alone with Ty - her strangely intense and oddly disquieting kidnapper. Now all she can think about is how to get home. But as time passes and all of her escape attempts fail miserably and Gemma slowly gets to know the man who has captured her, she realises that there is more to this story than she ever would have guessed. Written as a letter to her captor, Stolen is a haunting look at the twisted nature of love, friendship, and the lengths some people will go to avoid being alone.

Stolen is written for a more mature teen audience and does contain some adult language including the F word.

Want to buy Stolen? Please support your local brick and mortar stores!
Barnes & Noble
Books a Million
Find an Indie Store near you
We don't promote any particular store or location - we just want to encourage you to shop at your local store and keep them in business!

SPOILERS AHEAD!
While we don't give too much away, we do talk about the book as though we've read it. Take a look at what we had to say about this month's pick below or you can jump down to the bottom to see what book we'll be reading for March!


Eileen: Stolen is an interesting but intense look at the development of Stockholm's Syndrome. The letter form of writing is not used very often and I did enjoy that. However, because the Stockholm's Syndrome is developed gradually the story's pace is very slow. That, combined with the subject of the book, may make this a difficult read for some. Nevertheless, the emotions of the book are believable and the locations well-described. Therefore, this twisted love story will stick with me.

Jenn N: What really intrigued me about this book was the character development of Ty (the kidnapper). At first he seems like a heartless monster, but as he describes his motives and background, you come to feel some sympathy for him. While a tough childhood doesn't excuse his crime or make it forgivable, it does show you that criminals are not totally evil. They are human beings and hopefully for those like Ty rehabilitation and redemption is possible. This novel is also a perfect example of why women need to be on guard at all times. Stranger danger doesn't just apply to children.

Jess P: I was the oddball of the group that didn't enjoy the book. I felt it was very repetitive in Gemma's escape attempts and that she always got caught. Just once I wanted to see her succeed! However, the book did affect me as I had a nightmare about being in her situation after I finished the book!

Rebecca T: There are a lot of things that I enjoyed about this novel, but I think that, once again, it comes down to the character development. I was so intrigued by Gemma's reaction to her situation - and so glad to see a heroine that didn't just calmly or sullenly accept her fate. She fought. She fought the physical constraints and the emotional and psychological stress. She tried to run away. Over and over. She yelled back at Ty; she ignored him; she did whatever she could. Granted, she began to make concessions. There were things she gave up, but it was always with the end goal of getting free. Something that is sadly lacking in a lot of female protagonists, particularly in YA contemporary (imo).

Have you read Stolen? What are your opinions? We'd love to hear from you!

What are we reading in March?
After much debate we've decided on Miss Peregrine's Home for Peculiar Children by Ransom Riggs. The discussion post should be up on the 24th. We'll see you next month! And if you like what you've seen here, we'd love it if you showed your support by following our blog and maybe even liking us on Facebook :)
Posted by Rebecca T. at 6:00 AM